Uproar in French parliament after 'back to Africa' outburst 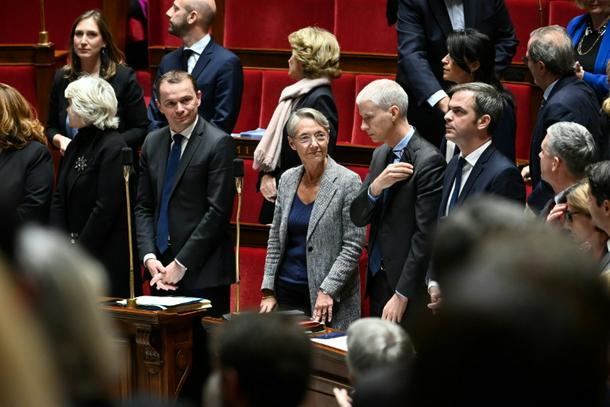 'Racism has no place in our democracy,' responded Prime Minister Elisabeth Borne, urging the assembly to sanction the far-right MP

Paris (AFP) - A French parliament session was thrown into turmoil Thursday after a far-right MP was accused of yelling “back to Africa” to a black colleague posing a question on migrant arrivals to the government.

The incident came as President Emmanuel Macron’s government is promising a new crackdown on immigration amid accusations of failing to stem new arrivals or deport those whose residency requests are denied.

Carlos Martens Bilongo of the leftist France Unbowed party (LFI) was questioning the government on the request by the SOS Mediterranee NGO for Paris’s help in finding a port for 234 migrants rescued at sea in recent days.

“They should go back to Africa!” interrupted Gregoire de Fournas, a newly elected member of the far-right, anti-immigration National Rally (RN).

The outburst sparked yells of condemnation, not least because in French the pronouns “he” and “they” are pronounced the same, suggesting that de Fournas might have been targeting Bilongo directly.

A member of Macron’s entourage said the president was “hurt” by the “intolerable” comments, while Prime Minister Elisabeth Borne urged the assembly to sanction the far-right MP, adding: “Racism has no place in our democracy.”

The RN is the party of far-right leader Marine Le Pen, who backed her MP on Twitter by saying “the controversy created by our political opponents is obvious and will not fool the French people”.

Le Pen challenged Macron in this year’s presidential vote and then led her party to its best-ever performance in subsequent legislative elections, with 89 MPs.

The party was founded by her father Jean-Marie Le Pen but his daughter claims to have overhauled the former National Front into a mainstream force, despite critics who say the changes are only cosmetic.

National Assembly speaker Yael Braun-Pivet suspended the session after demanding to know who had made the comment, in an extremely rare intervention.

De Fournas later defended his comment, telling BFM television that the National Rally wants a halt to all illegal immigration after a surge in the number of people trying to reach France from Africa in recent years.

He accused France Unbowed opponents of “manipulation” and his party also denied any personal attack against Bilongo, a teacher of Congolese heritage who was born in Paris.

De Fournas later apologised to Bilongo for “the misunderstanding my comments caused” and if he was hurt by them.

Jordan Bardella, favourite to take over officially from Le Pen at this weekend’s RN congress, insisted the MP had meant the return of boats to African ports and accused LFI and the government of “extreme dishonesty”.

LFI leader Jean-Luc Melenchon tweeted that the comments were “beyond intolerable” and that the deputy should be kicked out of the National Assembly.

A parliamentary committee will meet Friday to discuss the incident, which could see de Fournas punished with a temporary exclusion from the Assembly.

Macron’s centrist Renaissance party will refuse to attend further sessions unless the council issues a “heavy penalty”, its vice-president in parliament Sylvain Maillard said on Twitter.

The ruling party failed to win an overall majority in the legislative elections, leading to tensions as Macron’s government seeks to push key bills through the legislature.