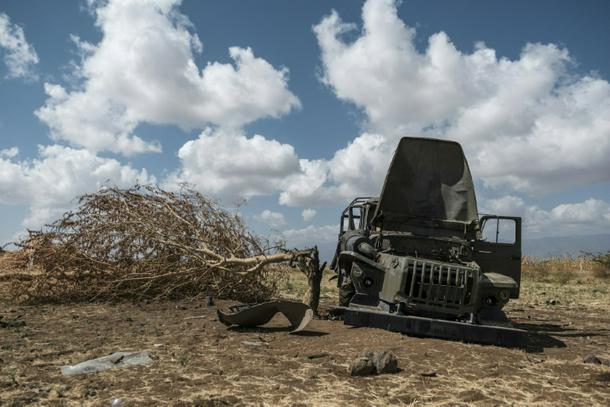 The conflict erupted in November 2020

The negotiations have been flagged to start on Monday, after a surge in fighting in the north of Ethiopia in recent weeks that has triggered alarm in the international community.

Ethiopia’s government has also said it will participate in the negotiations as diplomatic pressure mounts for an end to a war in Africa’s second most populous country that has killed unknown numbers of people and left millions in need of humanitarian aid.

Kindeya Gebrehiwot, a spokesman for the rebel authorities in Tigray, announced the delegation’s arrival in South Africa in a statement on Twitter late Sunday.

“Pressing: immediate cessation of hostilities, unfettered humanitarian access & withdrawal of Eritrean forces. There can’t be a military solution!” he added.

It was not immediately known if the Ethiopian delegation had arrived.

Fighting resumed in August, shattering a five-month truce, and has seen the return of the Eritrean army to the battlefield in support of Ethiopian forces and their regional allies.

Last week, the government vowed to take control of airports and other federal sites in Tigray from the rebels as Ethiopian and Eritrean troops seized towns in the war-torn region, sending civilians fleeing.

Abiy, who sent troops into Tigray in November 2020 promising a quick victory over the northern region’s dissident leaders, had said last week the war “would end and peace will prevail”.

“Ethiopia will be peaceful, we will not continue fighting indefinitely,” the Nobel Peace Prize winner said Thursday.

“I hope the day when we will stand with our Tigrayan brothers to work together for development is near.”

International calls for a ceasefire have grown since the AU failed earlier this month to bring the warring sides to the negotiating table.

The return to the battlefield in August halted desperately-needed aid into Tigray, a region of six million that lacks food, medicine and other life-saving essentials as well as basic services.

Tigray has been under a communications blackout for over a year, and independent reporting from the region has been heavily curtailed.

The UN Security Council held a closed-door meeting on Friday to discuss the spiralling conflict and growing fears for civilians caught in the crossfire.

The US envoy to the United Nations, Linda Thomas-Greenfield, said after the talks that thousands of Ethiopian, Eritrean and Tigrayan forces were engaged in active combat.

“The scale of the fighting and deaths rival what we’re seeing in Ukraine, and innocent civilians are being caught in the crossfire,” she said.

“Over two years of conflict, as many as half a million – half a million -– people have died, and the United States is deeply concerned about the potential for further mass atrocities.”

The AU’s Peace and Security Council, its foremost conflict resolution body, also met for the first time Friday since the fighting resumed in August.

In a statement, the 15-member council welcomed “the mutual commitments to genuinely participate in the peace process” and hoped for a “fruitful outcome”.

The TPLF dominated Ethiopia’s ruling political alliance for decades before Abiy took power in 2018 and sidelined the party.