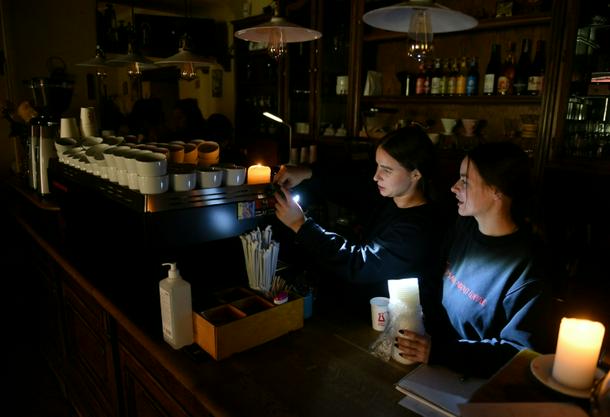 Employees prepare coffee in a cafe without electricity in western Ukrainian city of Lviv, after Russian missiles targeted energy infrastructure

Kyiv (Ukraine) (AFP) - Ukraine accused Russia on Thursday of turning its energy grid into a battleground and sparking a new wave of refugees from the country as Kyiv began curbing electricity consumption ahead of winter’s arrival.

“Tehran is now directly engaged on the ground, and through the provision of weapons that are impacting civilians and civilian infrastructure in Ukraine,” said White House national security spokesman John Kirby.

He added that there was also concern Iran might supply surface-to-surface missiles to Russia for use in the war.

“The United States is going to pursue all means to expose, deter and confront Iran’s provision of these munitions against the Ukrainian people,” he added.

For their part, both the European Union and United Kingdom announced sanctions on three Iranian generals and an arms firm accused of supplying Russia with suicide drones. 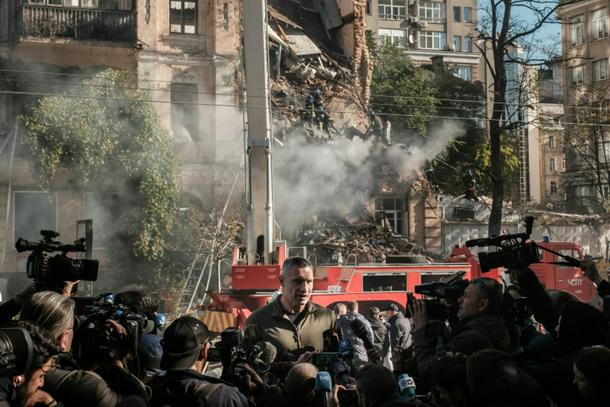 Kyiv's mayor, Vitali Klitschko, has urged businesses to limit screens and signage lights as the country struggles to cope with blackouts before winter sets in

With winter quickly approaching, Ukrainians were racing to restore damaged power facilities and preparing for a sharply curtailed electricity supply due to the Russian attacks.

Energy-saving measures were put in place across the country after Russian missile and drone strikes destroyed at least 30 percent of the country’s power stations in a week, according to authorities.

“Russia’s leadership has given the order to turn the energy system itself into a battlefield. The consequences of this are very dangerous, again for all of us in Europe,” Zelensky said in an address to the EU council.

The Russian strikes were “aimed at creating as many electricity and heat problems as possible for Ukraine this fall and winter and for as many Ukrainians as possible to go to your countries,” Zelensky said.

Following blackouts in parts of Kyiv overnight, the city’s mayor Vitali Klitschko urged businesses to limit screens and signage lights “as much as possible.”

“Even small savings and a reduction in electricity consumption in every home will help stabilise the operation of the national energy system,” he said.

Ukrainians responded defiantly to the attacks.

“It’s not going to change our attitude, maybe we will only hate them more,” said Olga, a resident of Dnipro in central Ukraine who declined to give her last name.

“I would rather sit in the cold, with no water and electricity than be in Russia,” she said.

People were rushing to buy auxiliary power supplies like generators and batteries, according to Kyrylo, an electronics vendor.

Speaking of the coming winter, he said: “I think that there will be nothing that we cannot survive.”

“There will be some kind of heating in any case, and the fact that it will be 16 (degrees Celsius, or 61 Fahrenheit) instead of 20 doesn’t matter much. Just put on a thermal and socks,” he said. 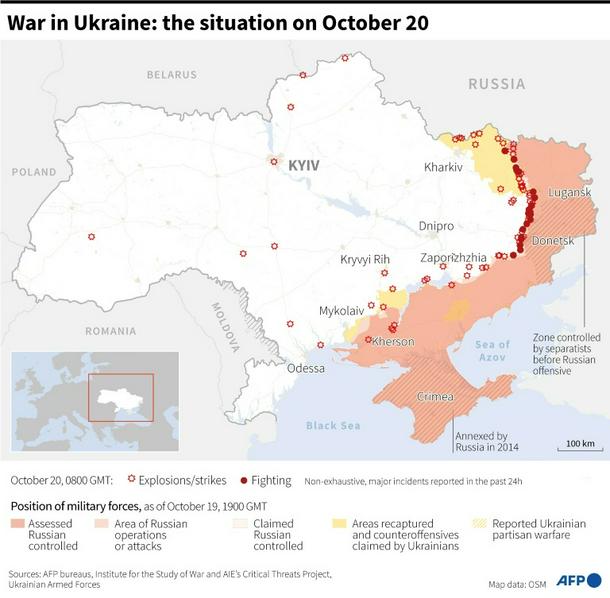 War in Ukraine: the situation on October 20

Little changed along the long front lines, where Russia has been sending many of the 200,000 troops newly called up to the fight.

Russian President Vladimir Putin on Thursday visited a training centre for mobilised troops south-east of Moscow where he embraced soldiers and fired a gun.

Some fighters opened their rucksacks to show him what they had been equipped with, and he asked one about his family, who replied he had a five-year-old daughter.

Putin hugged him and wished him “good luck.”

Meanwhile Russia continued to evacuate people from Kherson city as Ukrainian forces inched closer to the southern hub, in Moscow’s hands since the earliest days of the invasion in February.

Moscow-installed authorities in Kherson said that around 15,000 people have been moved out. 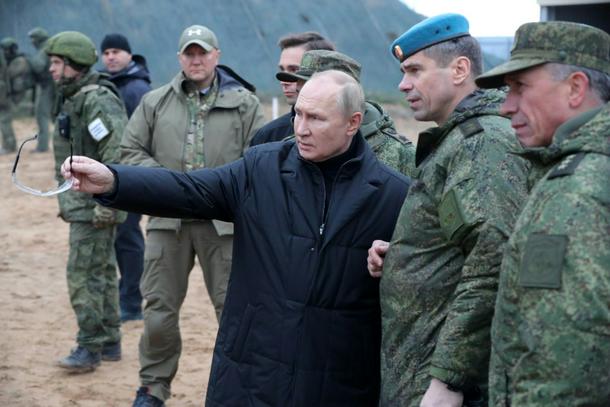 Russia’s Rossiya 24 TV showed images of people waiting to board ferries, unable to use bridges damaged by Ukraine.

Kirill Stremousov, a pro-Russian official, said on Telegram that the evacuations would give Russian forces more room to fight, and said they would not cede the city back to the Ukrainians.

“Remember, nobody is going to give up Kherson,” he said.

But Ukrainians said the exit of civilians from the area was in fact forced deportations to Russia.

The US-based Institute for the Study of War, in its daily analysis, said that as Ukrainian forces continue to close in on Kherson city, Russian authorities “are likely setting information conditions to justify planned Russian retreats and significant territorial losses.” 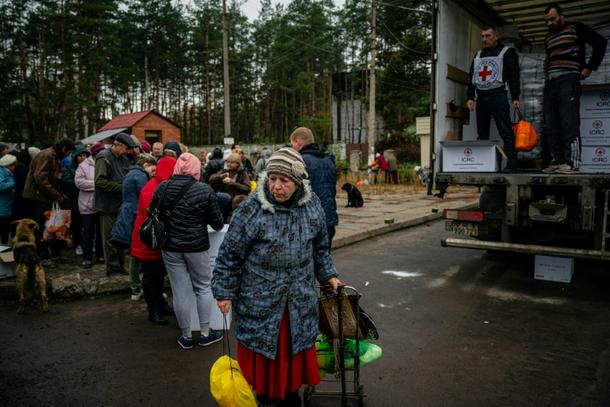 Zelensky meanwhile warned in his evening address that Russians had planted mines at a hydroelectric dam upriver from Kherson city.

If the Kakhovka hydroelectric power plant were to be destroyed, it would be “a catastrophe on a grand scale,” he said.