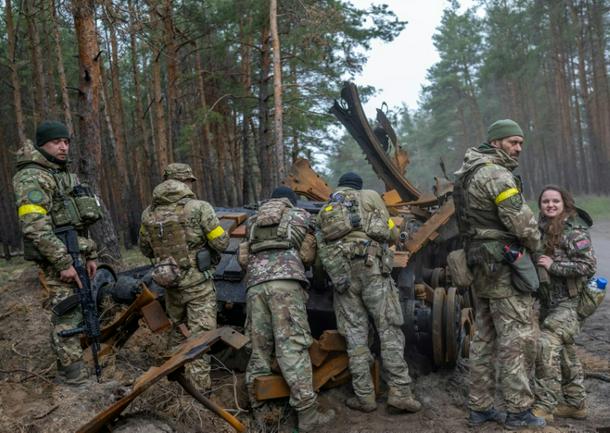 Kyiv (Ukraine) (AFP) - Russia said Friday it had finished pulling back its troops from Kherson in southern Ukraine, abandoning the only regional capital its forces had captured in nearly nine months of fighting.

The Kremlin meanwhile insisted that the city was still part of Russia and said it did not regret annexing the urban hub and the Kherson region at a lavish ceremony in late September.

The announcement came hours after Russian strikes battered a residential building in Mykolaiv, killing at least seven people in the city near Kherson that Moscow’s forces have been battering for months.

“Today at 5 o’clock in the morning Moscow time (0200 GMT), the transfer of Russian troops to the left bank of the Dnipro River was completed. Not a single piece of military equipment and weapons was left on the right bank,” the Russian defence ministry said in a statement on social media.

Ukrainian officials have remained wary after Moscow announced this week that it would pull forces to defensive positions on the east bank of the river in Kherson, in what would be a major Russian setback in a region Vladimir Putin claimed to have annexed.

The Kremlin however on Friday dismissed any suggestion the status of the region had changed after the retreat.

“This is a subject of the Russian Federation. There are no changes in this and there cannot be changes,” Kremlin spokesman Dmitry Peskov told reporters.

The region of Kherson was one of four territories of Ukraine that Vladimir Putin annexed during a grand ceremony in the Kremlin in late September, at the same time vowing to use all available methods to defend it from Kyiv.

Asked by reporters whether Russia now regretted annexing Kherson, Peskov said the Kremlin had “no regrets” about the move. 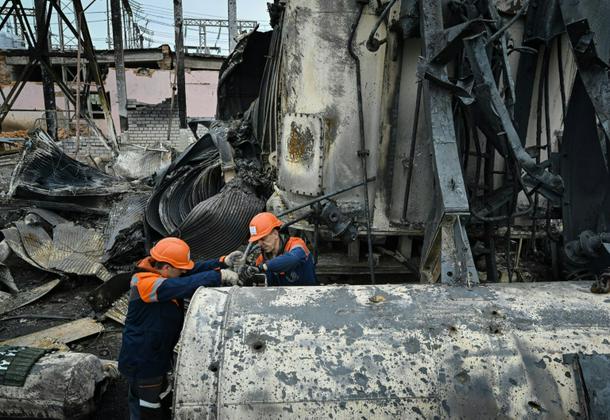 Employees work on damaged equipment at a high-voltage substation of the operator Ukrenergo after a missile attack, in central Ukraine

Kherson was the first major urban hub to fall to Russian troops after President Vladimir Putin announced Moscow’s “special military operation” in Ukraine, and it was the only regional capital his forces seized.

Its capture by Ukraine’s forces would be a political and symbolic blow to Putin, but it would open a gateway for Ukraine’s forces to the entire Kherson region with access to both the Black Sea in the east and Sea of Azov in the West.

It would also disrupt an important land bridge for Russia between its mainland and the Crimean peninsula, which Moscow annexed from Ukraine in 2014.

The announcement from Moscow that it had finished retreating in Kherson came after a fatal Russian strike on a residential building in the southern city of Mykolaiv.

Russian troops failed to capture the Black Sea city from Ukraine in the early stages of their February invasion but have been launching rockets and missiles on the embattled city for months.

An AFP journalist at the scene of the strike saw a gaping hole cut through a Soviet-style residential building with emergency workers in yellow helmets on the site clearing rubble.

The Mykolaiv regional governor Vitaliy Kim said on social media that the toll had risen to six after the latest fatal attack on the city that has been battered for months by Russian forces.

And President Volodymyr Zelensky said the strike was a “cynical response to our successes at the front.”

He announced late Thursday that as part of a counteroffensive since August that his forces had recaptured more than 40 towns and villages in southern Ukraine.

And the United States meanwhile announced a new $400 million security assistance package for Kyiv, which will include defense systems and surface-to-air missiles as Ukraine is reeling from massive recent Russian airstrikes targeting key infrastructure.