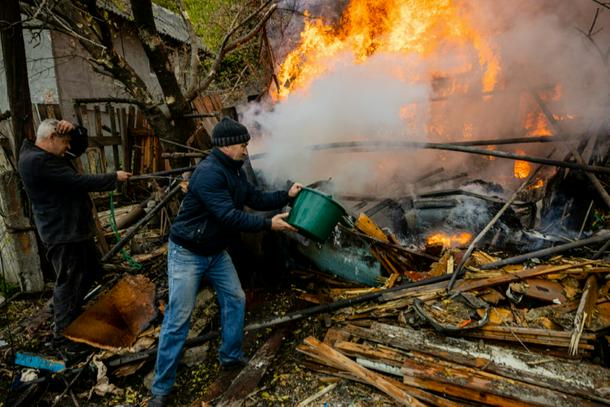 More than one million Ukrainian households have lost electricity following recent Russian strikes, according to the Ukrainian presidency, with at least a third of the country’s power stations destroyed ahead of winter.

Moscow announced a new incursion on Sunday, saying it had destroyed a depot in central Ukraine that was storing over 100,000 tonnes of aviation fuel.

Ukrainian President Volodymyr Zelensky on Saturday evening denounced “vile strikes on critical objects” by Russia after fresh attacks on energy facilities and power outages were reported nationwide including in western Ukraine – far from the frontline.

The blackouts started from 11:13 am (0813 GMT) with consumers in Kyiv divided into three groups that will be “disconnected for a certain period of time”, DTEK said.

It added that the blackouts should last “no more than four hours” but may be longer “due to the scale of damage to the power supply system”. 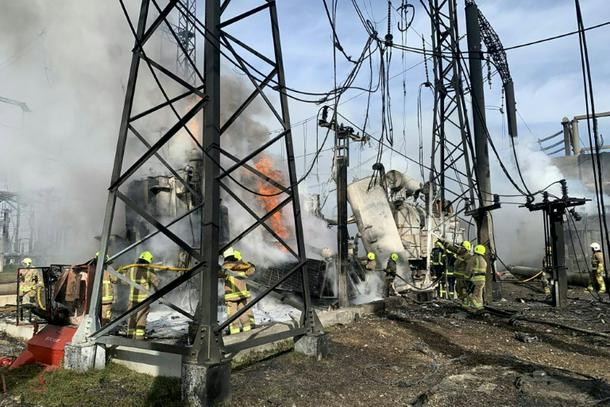 DTEK reiterated calls for residents to use electricity “sparingly” and for businesses to limit their use of external lighting.

In the southern Ukrainian city of Kryvyi Rig, deputy mayor Sergiy Miliutin was dealing with emergencies and power outages from his underground bunker used as a venue for a children’s martial arts competition.

“I’ve reached a point where I just survive on my drive. You have to stay level-headed and save your strength. No one knows how long this will all last,” he told AFP. 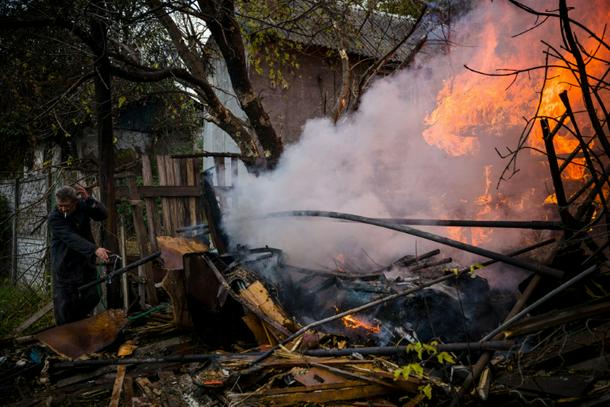 More than one million Ukrainian households have been left without power following recent Russian strikes, according to the Ukrainian presidency

The intensification of Russian strikes on Ukraine, particularly energy facilities, came after the bridge linking the annexed Crimea peninsula to mainland Russia was partially destroyed by an explosion earlier this month.

The incident was seen as another major setback for Moscow’s forces, which are battling to contain a Ukrainian counter-offensive in the south and east of the country.

Shoigu conveyed “concerns about possible provocations by Ukraine with the use of a ‘dirty bomb’” in all three calls, the Russian defence ministry said.

Ukraine reported three deaths in an overnight Russian artillery strike in the Toretsk area, said a governor of the eastern Donetsk region.

In Russia itself, two lines of defence have been built in the region of Kursk near the border with Ukraine to deal with a possible attack, a local governor said Sunday. 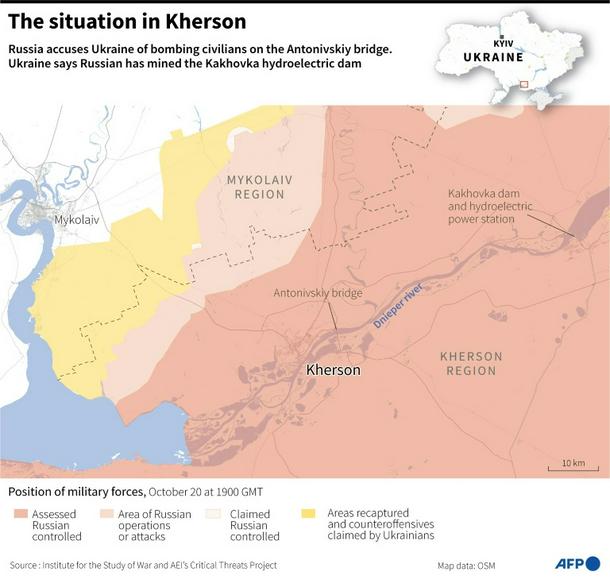 The move came a day after the governor in the neighbouring region of Belgorod, which also borders Ukraine, said the construction of defence structures began in parts of the region.

The governor, Vyacheslav Gladkov, also reported the death of two civilians in strikes on his region on Saturday, adding that 15,000 people were left without electricity.

The SBU said the management of the company’s plant in Ukraine’s southern Zaporizhzhia region – part of which is controlled by Russian forces – “acted in collusion” with Russian state-owned defence conglomerate Rostec.

“The suspects established transnational channel for the illegal supply of wholesale batches of Ukrainian aircraft engines to the aggressor country,” the SBU said, specifying that Russia used them to produce and repair attack helicopters.

The power cuts and deadly strikes came as pro-Moscow officials in the southern Ukrainian region of Kherson that Russia claims to have annexed urged residents on Saturday to leave “immediately” amid a “tense situation” at the front.

Kherson, the region’s main city, was the first to fall to Moscow’s troops and retaking it would be a major prize in Ukraine’s counter-offensive.

A Moscow-installed official in Kherson, Kirill Stremousov, told Russian news agency Interfax on Saturday that around 25,000 people had left Kherson city to the left bank of the Dnipro River.

Ukraine has denounced the removal of residents from Kherson as “deportations”.