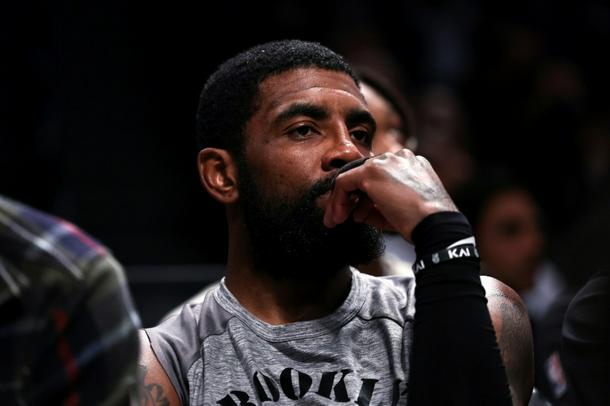 New York (AFP) - The Brooklyn Nets suspended Kyrie Irving for at least five games on Thursday, saying they were “dismayed” by the NBA star’s response after he was criticized for posting a link to anti-semitic material.

The Nets said in a statement they had made repeated efforts over the past several days to work with Irving on the issue to “help him understand the harm and danger of his words and actions, which began with him publicizing a film containing deeply disturbing anti-semitic hate.

“We were dismayed today, when given an opportunity in a media session, that Kyrie refused to unequivocally say he has no anti-semitic beliefs, nor acknowledge specific hateful material in the film,” the team said. “This was not the first time he had the opportunity - but failed - to clarify.

“Such failure to disavow anti-semitism when given a clear opportunity to do so is deeply disturbing, is against the values of our organization, and constitutes conduct detrimental to the team. Accordingly, we are of the view that he is currently unfit to be associated with the Brooklyn Nets.”

The Nets’ announcement came after NBA commissioner Adam Silver expressed his disappointment that Irving failed to apologize for his social media link to the film “Hebrews to Negroes: Wake Up Black America” – a 2018 film widely lambasted for containing a range of anti-semitic tropes that was criticized by, among others, Nets owner Joe Tsai.

Silver was pleased that Irving had since announced he would make a $500,000 donation to groups working to eradicate hate, Irving admitting the film had a “negative impact” on the Jewish community.

But the commissioner pushed for Irving to offer an “unqualified apology” and denounce “the vile and harmful content contained in the film he chose to publicize.”

That didn’t happen when Irving appeared before reporters at the team’s training facility on Thursday, and the Nets determined he needed to do more.

“We have decided that Kyrie will serve a suspension without pay until he satisfies a series of objective remedial measures that address the harmful impact of his conduct,” the Nets said. “And the suspension period served is no less than five games.”

Irving, a seven-time NBA All-Star, was the top overall selection in the 2011 draft and is widely considered one of the best players in the league.

He has shared controversial opinions before, and was sidelined much of last season because of his refusal to be vaccinated against Covid-19.

Irving once caused a flap by suggesting he believes the Earth is flat and in October he was criticized by NBA legend Kareem Abdul-Jabbar for sharing a video from far-right conspiracy theorist Alex Jones.

He reiterated Thursday that he takes “full responsibility” for his post, but also emphasized that he was “not the one who made the documentary.”

“Just because I post a documentary doesn’t mean I’m anti-semitic, and it doesn’t mean I’m automatically standing with everyone that’s believing it,” he said. “I’m proud of who I am and any label that you put on me I’m able to dismiss because I study.

“The fact this has pitted me against the Jewish community and I’m here answering questions on whether or not I’m sorry or not on something I didn’t create – it was something I shared and I’m telling everybody I’m taking responsibility – then that’s where I sit,” Irving said.

“When I repeat myself that I’m not going to stand down it has nothing to do with dismissing any other race or group of people. I’m just so proud of my heritage and what we’ve been though,” added Irving, who of African American and Native American descent.

Irving spoke about Black history and slavery, calling himself a “beacon of light” in darkness.

“I’ve been growing up in a country that told me I wasn’t worth anything and I came from a slave class,” Irving said.

“So I’m not here to compare anyone’s atrocities or tragic events that their families have dealt with for generations of time.

“I’m just here to continue to expose things that our world continues to put in darkness. I’m a beacon of light. That’s what I’m here to do.”