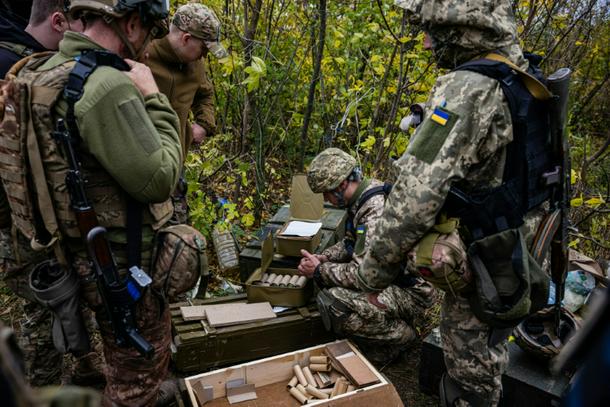 Ukrainian troops check their ammunitions at a position on the front line in the Donetsk region on October 24, 2022

Brussels (AFP) - Russia must not escalate the conflict in Ukraine with false claims that Kyiv is planning to unleash a so-called “dirty bomb”, the head of NATO warned Monday.

Jens Stoltenberg weighed in following Moscow’s repeated allegations that Ukraine could deploy such a weapon, sparking fears Russia could use one and blame Kyiv.

The head of the US-led military alliance said he had spoken with Pentagon chief Lloyd Austin and Britain’s Defence Secretary Ben Wallace “about Russia’s false claim that Ukraine is preparing to use a dirty bomb on its own territory.”

“NATO Allies reject this allegation. Russia must not use it as a pretext for escalation. We remain steadfast in our support for Ukraine,” he wrote on Twitter.

Moscow has alleged that Ukraine is close to developing a dirty bomb, and Foreign Minister Sergei Lavrov insisted the threat is real.

“This is not empty information… there are serious suspicions that such things may be planned”, Lavrov said, adding: “We have a keen interest in preventing such a terrible provocation.”

But State Department spokesman Ned Price said Washington is worried that Russia’s claims could be a cover.

The head of the Russian army Valery Gerasimov repeated Moscow’s claims in a telephone call with his US counterpart on Monday, the defence ministry said.

The call was the latest in a string of conversations between Russian defence officials and counterparts from NATO countries, during which Moscow said, without providing evidence, that Kyiv was planning to deploy a dirty bomb.

In a statement on Monday, Russian Lieutenant General Igor Kirillov said: “According to the information we have, two organisations in Ukraine have specific instructions to create a so-called ‘dirty bomb’. This work is in its final stage”. 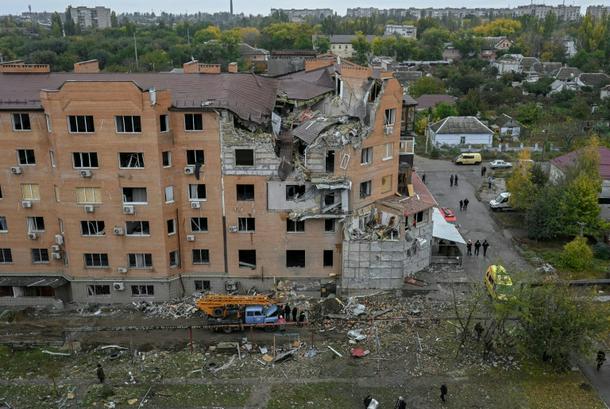 A building damaged by a rocket attack in Mykolaiv on October 23, 2022

At its most basic, a dirty bomb is a conventional weapon laced with radioactive, biological or chemical materials that are disseminated in an explosion.

Moscow’s claims follow weeks of military defeats for Russia in southern and eastern Ukraine, with observers and Kyiv saying the Kremlin is becoming increasingly desperate.

In Kyiv’s latest announcement of territorial gains, the Ukrainian military claims to have pushed Russian forces from several villages in the northeast of the country.

“Due to successful actions, our troops pushed the enemy out of the settlements of Karmazynivka, Myasozharivka and Nevske in the Lugansk region and Novosadove in Donetsk region,” the Ukrainian military said in a statement.

Both Kyiv and its allies have fiercely rejected the dirty bomb claims, which follow thinly veiled threats from Moscow of potential nuclear escalation. 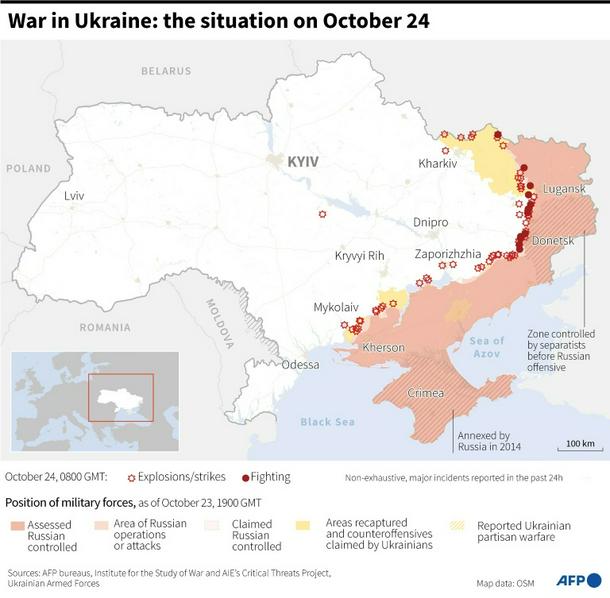 Ukraine: the situation on October 24

The IAEA confirmed in a statement that it would visit two Ukrainian facilities “in the coming days.”

“Our countries made clear that we all reject Russia’s transparently false allegations that Ukraine is preparing to use a dirty bomb on its own territory,” the statement said.

With the help of Western-supplied heavy weapons, Ukraine has managed to claw back swathes of its territory from Russia in the east and south, while its power grid has been pummelled ahead of winter.

As momentum has swung toward Ukraine, Russian President Vladimir Putin has faced fissures in domestic support for his campaign, as a messy troop draft and battlefield losses challenged the prospect of a quick conclusion.

The Kremlin meanwhile said on Monday that France and Germany were showing “no desire” to participate in mediation on the conflict and praised Turkish President Recep Tayyip Erdogan’s offer to organise talks.

Turkey helped broker the deal that allowed grain exports to resume under the UN’s aegis in July, and played a role in a prisoner swap in September, one of the largest exchanges.