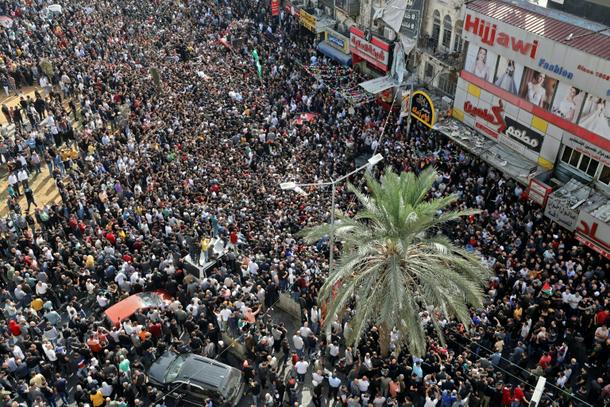 Mourners mass for the funeral of Palestinians killed in an overnight Israeli raid targeting the emerging 'Lions' Den' armed group in the occupied West Bank city of Nablus on October 25, 2022

The Palestinian health ministry said five people were killed in Nablus in the northern West Bank, where Israel confirmed an overnight operation targeted the group, which it blames for multiple recent attacks.

Another Palestinian died from a gunshot wound to the chest during overnight clashes with Israeli forces in Nabi Saleh, north of Ramallah, the health ministry said.

Israeli Prime Minister Yair Lapid said that Wadi al-Houh, whom he described as “the head” of the Lions’ Den, was among those killed in Nablus. 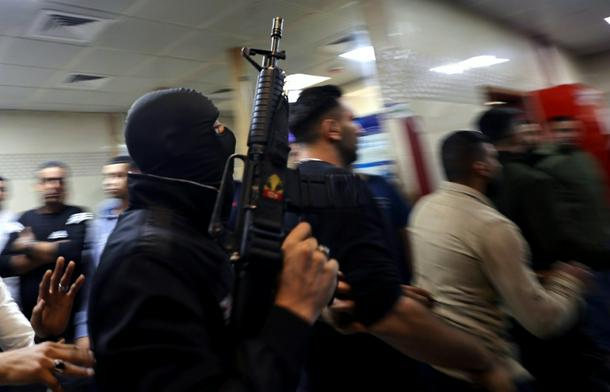 The army said it had carried out a major operation with police and intelligence officers targeting a location “used by the main operatives” of the group, describing the site as a “headquarters and a workshop for making weapons”.

“During the activity, multiple armed suspects were hit.”

Later Tuesday, the army said it had arrested a suspect after an Israeli civilian was stabbed near Al-Funduq, a Palestinian village west of Nablus.

Medics said a 55-year-old male victim was in moderate condition.

In Washington, Secretary of State Antony Blinken said the US had “real concern” over the West Bank violence.

“We’re urging everyone to take the necessary steps to try to de-escalate that violence and to avoid actions or statements that may incite it,” he said during a visit by Israeli President Isaac Herzog.

Violence has surged in recent months in the north of the West Bank – the Palestinian territory occupied since 1967 by Israel – especially in the areas of Nablus and Jenin. 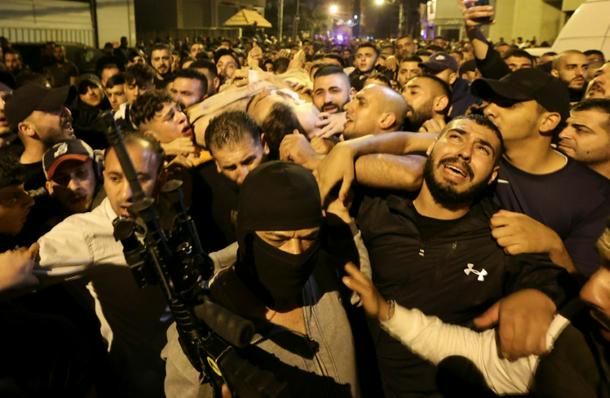 Men carry the body of the alleged Lions' Den leader from a hospital in Nablus after he was killed in a clash with Israeli soldiers, in the occupied West Bank on early October 25, 2022

An Israeli military official told AFP that “we embarked on an intelligence-based operation to halt the Lions’ Den terror attacks” after “trying to let the Palestinian Authority contain the group and them failing to do so”.

“The region has been thoroughly reinforced, we’re prepared for an escalation,” the official, who spoke on condition of anonymity, added.

On the death reported at Nabi Saleh, the army said it had “spotted a suspect throwing an explosive device” at soldiers, who opened fire. 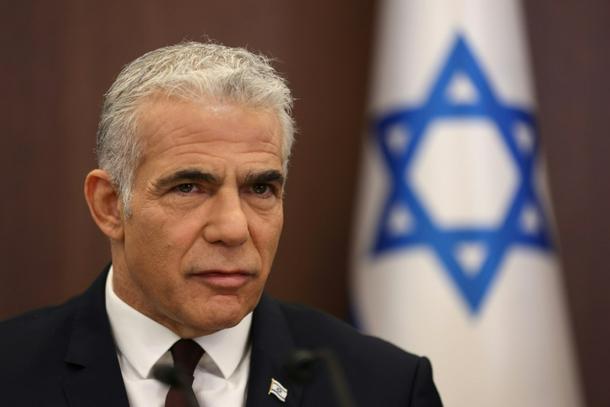 In a statement posted to messaging app Telegram, the militant group was defiant. “Surrender is the path of humiliation,” it said. “It’s time for the lions to come out of their den.”

A sea of mourners carried bodies through the streets of Nablus ahead of the burials as gunman fired into the air.

More than 100 Palestinian fighters and civilians have been killed since the start of the year, the heaviest toll in the West Bank for nearly seven years, according to the United Nations. 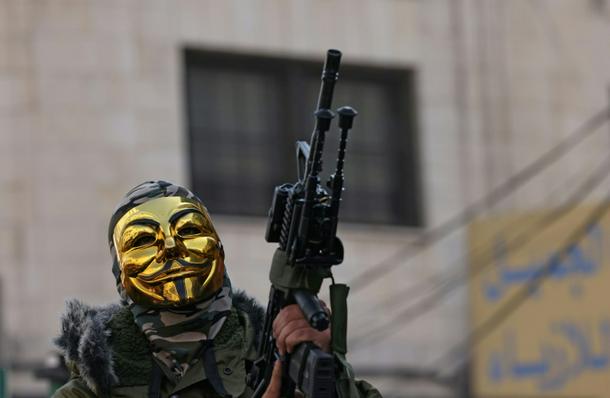 Military chief Aviv Kohavi vowed Tuesday that Israel would lay its hands on all Palestinian militants.

“Terror can’t hide,” he said in a speech. “We’ll reach every city, neighbourhood, home or basement and every terrorist will end up arrested or dead.” 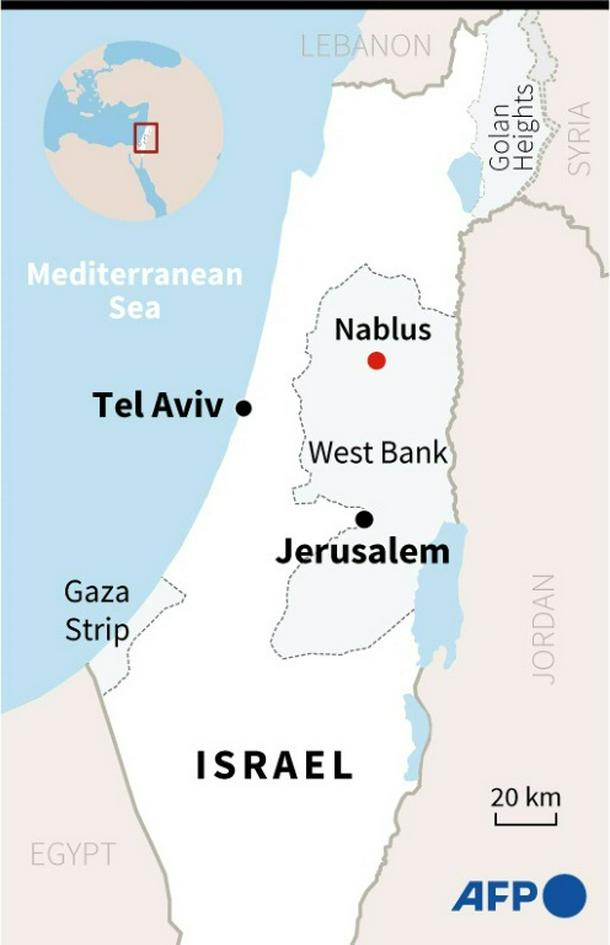 Map of Israel and Palestinian territory, including the city of Nablus

Palestinian president Mahmud Abbas is making “urgent contacts in order to stop this aggression against our people” in Nablus, his spokesman Nabil Abu Rudeinah said in a statement.

The chief of Islamist armed group Hamas, Ismail Haniyeh, warned in a statement that the violence would “plunge Palestine into escalation”.

Khaled al-Batsh, a leader in the Palestinian Islamic Jihad group, urged “confrontation” with Israel on all “fronts”. 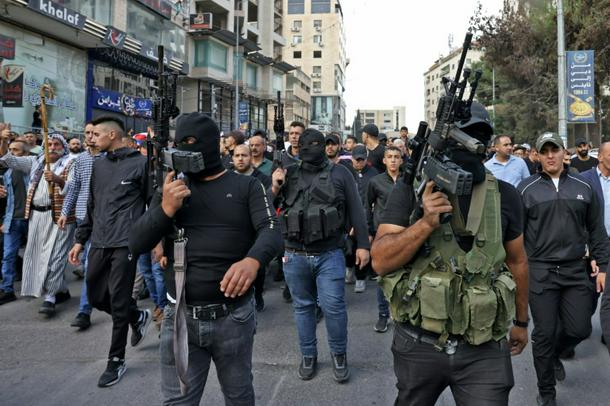 In recent weeks, a group of young Palestinian fighters – some affiliated with groups such as Fatah, Hamas and Islamic Jihad – have launched militant attacks from Nablus.

The Lions’ Den claimed responsibility for a deadly attack on an Israeli soldier two weeks ago in the West Bank.

Late leader Ibrahim al-Nabulsi, nicknamed “The Lion of Nablus”, was known for galvanising the youth before he was shot dead by Israeli forces in August. He has since become a folk hero to Palestinians on social media. 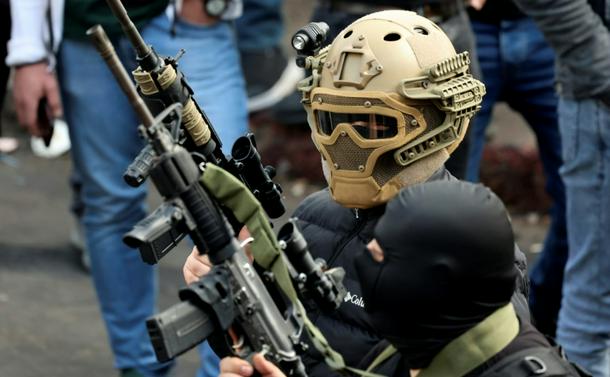 In the aftermath, the Israeli army tightened its grip on Nablus, setting up controls to identify people leaving the city and constantly scanning the area with observation drones.

On Saturday night, a Lions’ Den fighter, Tamer al-Kilani, was killed in Nablus by an “explosion” attributed by the group and Israeli press to a bomb remotely activated by the Israeli army.