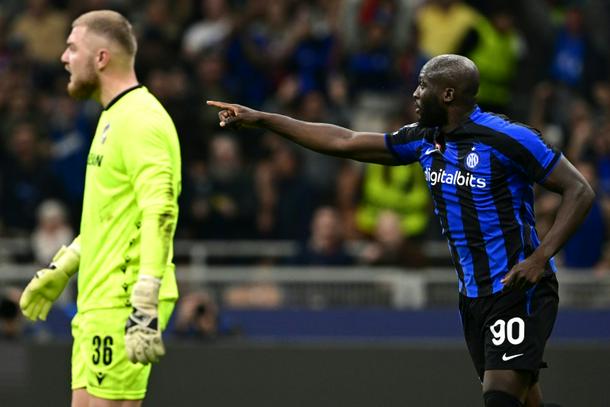 Milan (AFP) - Romelu Lukaku scored on his Inter Milan return on Wednesday in a 4-0 thumping of Viktoria Plzen to help his side make the Champions League last 16 and knock Barcelona out of the competition.

Belgium striker Lukaku netted Inter’s fourth with three minutes remaining and only four after replacing Lautaro Martinez, after Henrikh Mkhitaryan and an Edin Dzeko brace had already effectively ensured his team of at least second place in Group C.

Inter’s thumping win at the San Siro, Lukaku’s first appearance in two months following a thigh injury, has relegated Barca to the Europa League ahead of their match with Bayern Munich later on Wednesday.

Simone Inzaghi’s side are six points ahead of Barca and cannot be overtaken by the Catalans thanks to their better head-to-head record even if they beat group leaders Bayern.

Barca’s fate had already been almost sealed a fortnight ago when Inter draw a thrilling encounter at the Camp Nou 3-3, after a single-goal victory for Inter the previous week.

Xavi Hernandez’s Barca were favourites to go through with Bayern when the group stage draw was made, but they have won just one of their four fixtures and collected only four points.

Being knocked out so early is an embarrassment for Barca after a lavish summer spending spree and is also a further strain on their troubled accounts.

Barca were 1.3 billion euros ($1.28 billion) in debt before president Joan Laporta and the board pulled their infamous “palancas”, or financial leverage.

Meanwhile Inter’s qualification for the knockout stages of Europe’s top club competition continues a drastic upsurge in form for a team which looked deep in crisis at the start of the month.

Five wins from their last six matches in all competitions have made Inter one of a likely three Italian teams in November’s draw for the next round and have fans hoping of another Serie A title challenge.