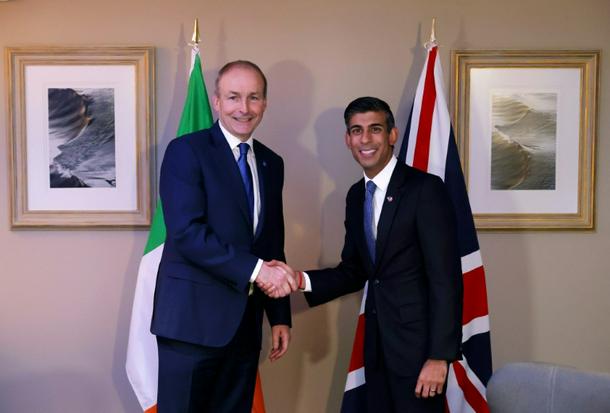 Blackpool (United Kingdom) (AFP) - Irish prime minister Micheal Martin on Friday said there was “a window of opportunity” for Britain and the European Union to resolve a dogged dispute over post-Brexit trade in Northern Ireland.

Speaking after two days of broader talks between UK and Irish leaders in Blackpool, northwest England, Martin said he had a “positive perspective” following a meeting with new UK counterpart Rishi Sunak.

Martin and Sunak met Thursday as they bid to end the long-running row over the Northern Ireland Protocol which has paralysed power-sharing government in Belfast and put London at loggerheads with Brussels and Dublin.

“It’s my assessment that the window of opportunity now does exist,” Martin said as the British-Irish Council summit concluded.

In an apparent sign of renewed commitment to ease the post-Brexit frictions in Northern Ireland, Sunak became the first UK prime minister since 2007 to attend the regular gathering.

“The space now exists to resolve the outstanding issues pertaining to the protocol by negotiation, and obviously that will need momentum,” Martin added.

“It will need substantive engagement by the EU and UK government to make that a reality.”

The protocol was signed separately from the trade and cooperation deal that cemented the UK’s formal departure from the European Union in January 2021.

But its implementation has proven a flashpoint for disagreement between the bloc, member state Ireland and Britain – and even threatens a possible EU-UK trade war.

That was designed to prevent a “hard” border between Ireland and Northern Ireland – a key plank of the 1998 Good Friday Agreement that largely ended three decades of conflict.

However, it has enraged hardline unionists, including the Democratic Unionist Party (DUP), leading to their boycott of the Stormont assembly in Belfast since February.

The UK government, which is risking EU reprisals by trying to overhaul the protocol unilaterally through legislation, has threatened to order a new vote.

Flanking Martin, senior UK minister Michael Gove said he was not aware of plans to pause the passage of the controversial draft law through parliament.

But he insisted the Blackpool talks had been “conducted in a cordial and constructive fashion”.

“We remain optimistic about the opportunities of reaching a resolution,” he added.

Europe’s pointman on the negotiations, Maros Sefcovic, said Monday an agreement could be found with the right “political will”.

London and Dublin hope a breakthrough over the protocol could pave the way for the restoration of power-sharing in Northern Ireland.

The DUP has said it will not return to Stormont unless the pact is scrapped or significantly overhauled.

On Wednesday, London extended a deadline to hold new elections, in the hope it can strike an agreement with Brussels in the coming weeks to break the deadlock in Belfast.

Asked about the prospect of power-sharing resuming, both Martin and Gove said “the sooner the better”.

“The pressure point is to really get this (protocol) issue resolved so we can create a pathway for the restoration of the institutions,” Martin added.

Gove expressed hope that it could have happened by the time British and Irish leaders next meet in June or July, 2023.