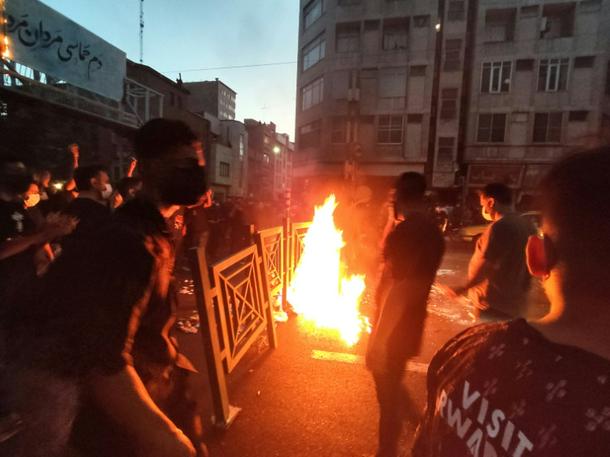 The unrest was triggered by fury over the dress rules for women, but has grown into a broad movement against the theocracy

That toll did not include six people authorities said were killed by gunmen who attacked protesters and police later Wednesday in the southwestern province of Khuzestan.

Street violence raged across Iran as protests sparked by the September 16 death of Amini intensified on the anniversary of a lethal 2019 crackdown.

Amini, a 22-year-old Iranian woman of Kurdish origin, died in the custody of the notorious morality police after her arrest for an alleged breach of Iran’s strict dress code for women.

“We’ll fight! We’ll die! We’ll take back Iran!” a crowd of protesters could be heard chanting on a Tehran street, in a video published by the 1500tasvir social media monitor.

In a widely shared video verified by AFP, security forces appear to open fire on dozens of commuters at a Tehran metro station, causing them to scramble and fall over each other on the platform.

Another verified video showed members of the security forces, including plainclothes officers, attacking women without hijab headscarves on an underground train.

Organisers of the protests have called for three days of actions to commemorate hundreds killed in the “Bloody Aban” – or Bloody November – demonstrations that erupted on November 15, 2019, after a shock decision to hike fuel prices.

The anniversary gave new momentum to the Amini protests, which have seen women burn their headscarves and confront security forces on the streets.

State media said “rioters” – a term Iranian officials use to describe protesters – killed two members of the Revolutionary Guards and a member of its Basij paramilitary force on Tuesday. 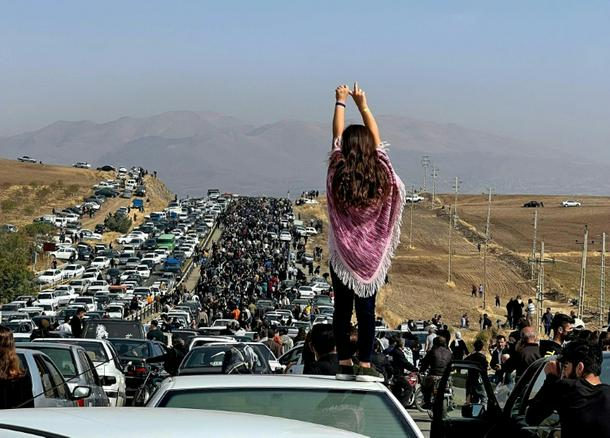 One guard was shot dead in Bukan, a city in Amini’s home province of Kurdistan, and another was gunned down in Kamyaran, a Kurdish-majority city in West Azerbaijan province, the official IRNA news agency reported.

The Basij member died after being hit by a Molotov cocktail in the southern city of Shiraz, it added.

A protester was killed on Wednesday in front of the house of one of three demonstrators shot dead the day before by the security forces in Kurdistan province, Oslo-based rights group Hengaw said.

The death of Burhan Karmi occurred in Kamyaran, where tensions were high for the funeral of mobile phone repair shop owner Fuad Mohammadi, the rights group said.

“Brother Fuad is a hero, the martyr of Kurdistan,” crowds of mourners chanted, in videos posted on social media.

Security forces have killed at least 342 people, including 43 children and 26 women, in the crackdown since Amini’s death, according to the latest toll released by Iran Human Rights (IHR) on Wednesday.

The rights group also said at least 15,000 people have been arrested – a figure the Iranian authorities deny.

Later on Wednesday, “armed and terrorist elements” on two motorcycles opened fire on protesters and security forces at a central market in the city of Izeh in Khuzestan, IRNA said. It said five people were killed and at least 10 wounded, adding later another victim had died in hospital.

Valiollah Hayati, the deputy governor of Khuzestan, said the fatalities included three men, a woman and a girl, while some of the wounded were in serious condition.

There was no immediate claim of responsibility for the attack. IRNA reported three people tied to the “incidents and riots” in Izeh had been arrested.

On October 26, at least 13 people were killed in an armed attack claimed by the Islamic State group on the Shah Cheragh mausoleum in Shiraz.

The judiciary said Wednesday that a revolutionary court handed down three more death sentences over the “riots”.

One was convicted of attacking police with his car, killing one, the second had stabbed a security officer and the third tried to block traffic and spread “terror”, its website said.

IHR director Mahmood Amiry-Moghaddam strongly condemned the death sentences, alleging that torture was used to extract confessions and warning of the possibility of mass executions.

Britain’s domestic spy agency MI5 said Wednesday that Iran wanted to kidnap or kill UK-based individuals it deems “enemies of the regime”, with at least 10 plots uncovered so far this year.