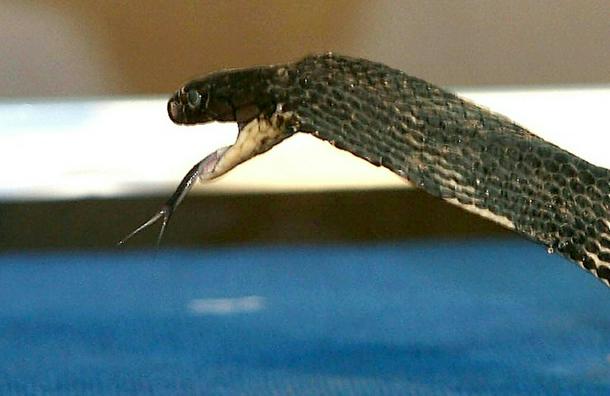 Stockholm (AFP) - A Swedish zoo has been partially shut down after a king cobra staged an impressive escape from its enclosure at the weekend, with staff on Monday still searching for the venomous vagrant.

The snake, named Sir Vas (Sir Hiss), escaped on Saturday through a lamp fixture in a terrarium and was believed to be somewhere in an inner ceiling.

He had only been brought to the zoo a few days earlier.

The snake has now been renamed Houdini after the famed escape artist, said Jonas Wahlstrom, director of the Skansen Aquarium.

Staff have spread out flour to try and track the slithery fugitive and sticky traps have been deployed.

They have also brought in special cameras designed to inspect sewage pipes, in order to search the nooks and crannies out of reach.

The terrarium has housed king cobras for about 15 years, but it only took the new tenant a few days to find a way out, Wahlstrom told AFP.

“It turned out to be clever,” he joked.

He explained that the escaped snake had an advantage over previous tenants: staff had recently replaced the lamp at the top of the enclosure with a low-energy bulb.

“The old light was so hot that no snake wanted to get close,” Wahlstrom said.

“But now it’s not hot at all and the new king cobra discovered this and wedged its head in between the lightbulb and the light fixture and managed to push itself out.”

A visitor managed to capture the escape on video, where a distressed person can be heard asking: “Is it safe to be here?”

A staff member calmly replied: “No, but we’re working on it.”

The reptile section was subsequently evacuated and has been closed until the escaped cobra is captured.

Wahlstrom said there was no danger of it escaping outside.

“It won’t get out, but hypothetically it’s also so cold outside that it would doze off immediately,” Wahlstrom said.

He also stressed that king cobras are typically quite calm and unlikely to attack.

They mainly prey on other snakes but their bites can be fatal to humans if untreated.