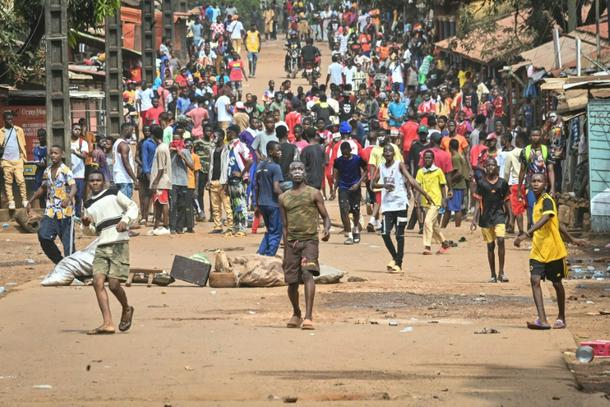 Protesters clash with security services in Conakry on Thursday

“In a dynamic compromise, experts from ECOWAS and Guinea have jointly developed a consolidated chronogram (timetable) for a transition spread over 24 months,” ECOWAS said in a document published on social networks by the junta.

The document, a report of a technical mission dispatched to Guinea by ECOWAS this week, does not specify when this 24-month period begins.

The timetable will first go to a meeting of ECOWAS leaders for approval and to officially trigger its implementation.

An ECOWAS summit is due to take place before the end of the year.

It gave the ruling junta one month to present a “reasonable and acceptable” timetable for the return of civilian rule, an ultimatum that theoretically expires this weekend.

However, the diplomatic bridges have never been broken and the Guinean authorities have reiterated their readiness to cooperate with ECOWAS, which had dispatched its mission to Conakry to work out a compromise schedule.

The poor but mineral-rich West African state has been under military government since a September 2021 coup that ousted president Alpha Conde after more than 10 years in power.

Military leader Colonel Mamady Doumbouya has since appointed himself president and had undertaken to restore civilian rule within three years.

Various West African officials had indicated that a two-year transition period would be acceptable.

A similar timeframe was agreed between ECOWAS and the ruling junta in neighbouring Mali after months of wrangling.

Under the terms of that agreement, reached in July, the Malian military were due to hand over the reins in March 2024. By then they would have been in power for more than three-and-a-half years since they overthrew the elected civilian president in August 2020.

In recent years ECOWAS has witnessed a succession of military coups in West Africa, in 2020 and 2021 in Mali, in 2021 in Guinea and twice this year in Burkina Faso.

It has duly increased its summits, missions and the pressure applied to shorten the transitional periods back to civilian rule, in the face of military authorities who are now in a hurry to stand down.

The transition compromise was reached to the background of violent clashes between protesters and the junta.

Guinea’s top prosecutor called Friday for a crackdown on the organisers and participants of a giant anti-government protest in which he said six security personnel were wounded while the opposition said three civilians were killed.

Young protesters clashed on Thursday with security forces in the capital Conakry ,in demonstrations called by an outlawed group against the junta.

The National Front for the Defence of the Constitution (FNDC) had called for the protest to demand a quick return to a civilian led government and the release of all prisoners detained for political reasons.

The group identified the three people killed as Thierno Bella Diallo, Boubacar Diallo and Thierno Moussa Barry. It said 20 people suffered gunshot wounds while many others were arrested.

Justice Minister Alphonse Charles Wright confirmed their deaths in a statement on Friday, but said the causes “remain to be clarified by autopsy”.

He ordered prosecutions, without commenting on the alleged perpetrators.