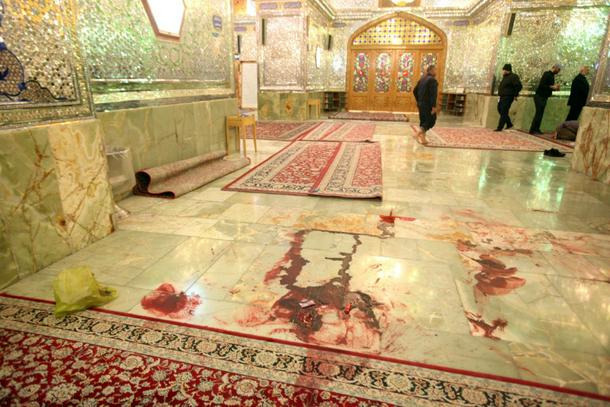 Tehran (AFP) - At least 15 people were killed Wednesday in an attack on a key Shiite Muslim shrine in southern Iran, state media said, with the Islamic State group claiming the assault.

The attack carried out by an armed “terrorist” during evening prayers at the Shah Cheragh mausoleum in the city of Shiraz also wounded at least 19 people, state television said.

Earlier reports said 13 people were killed and 40 wounded, and that three assailants were involved.

Local judiciary chief Kazem Mousavi told state television that “only one terrorist was involved in this attack”.

A witness told state news agency IRNA he “heard the cries of women” as evening prayers started, and that the “assailant entered the shrine and opened fire”.

IRNA carried a picture of a boy on a stretcher and another of a woman holding a child, with traces of blood on the ground.

Fars news agency said a woman and two children were among those killed.

The Islamic State group claimed responsibility for the attack.

The Shah Cheragh mausoleum is home to the tomb of Ahmad, brother of Imam Reza, the eighth Shiite imam, and is considered the holiest site in southern Iran.

He also condemned “the enemies of Iran” who attempt to “divide the united ranks of the nation… through violence and terror”, in a statement released by his office.

Wednesday’s attack comes as Iran has been rocked by street protests since the death of Mahsa Amini last month after she was arrested by the morality police for allegedly violating the Islamic republic’s strict dress code for women.

Dozens of people, mainly protesters but also members of the security forces, have been killed during the unrest. Hundreds more, including women, have been arrested.

State television reported one arrest over the shrine attack and said that the assailant was “a terrorist affiliated with takfiri groups”.

The term takfiri in Iran and in several other countries refers to radical Sunni Islamist groups.

The attack was the second deadliest this year against a Shiite shrine in Iran.

In April, a 21-year-old man of Uzbek origin stabbed two Shiite clerics and wounded another at the Imam Reza shrine, which honours one of the most revered figures in Shiite Islam.

The killings happened during the Muslim holy month of Ramadan when large crowds of worshippers had gathered at the shrine, in Iran’s second-largest city Mashhad.

The assailant stabbed one of the victims 20 times, Tasnim news agency had reported.

The young man, identified as a Sunni extremist by Iranian authorities, was sentenced to death and executed by hanging in June.

That attack came days after two Sunni clerics were shot dead outside a seminary in the northern Iranian town of Gonbad-e Kavus.

The three suspects in that case, also Sunnis, were arrested in late April but were said to have “no connection with terrorist groups”, state media reported at the time.

Wednesday’s assault was also the deadliest since February 2019, when 27 members of the Revolutionary Guards, Iran’s ideological army, were killed in an attack in the country’s southeast.

And in 2018, 24 people were killed in an attack in Ahvaz, in southwestern Iran, in an assault claimed by IS, though Iran accused a separatist group of responsibility.

IS claimed its first attack in Iran in 2017 when armed men and suicide bombers attacked the seat of parliament in Tehran and the mausoleum of Ayatollah Ruhollah Khomeini, the founder of the Islamic republic, killing 17 people and wounded dozens.