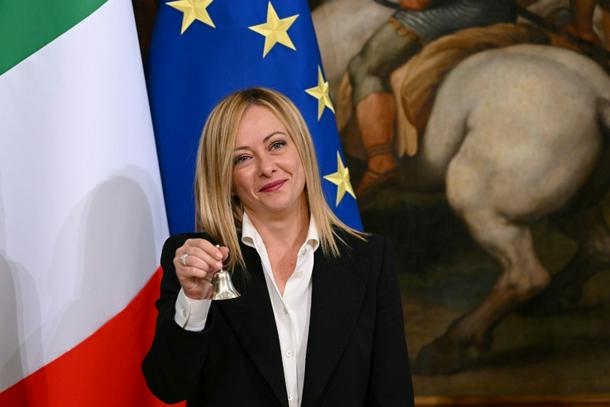 After almost 90 minutes of private talks, the pair smiled broadly as Draghi, a former European Central Bank chief, symbolically handed over to Meloni a small bell used in cabinet debates.

She will later hold her first meeting of ministers comprising members of her party and its allies, former premier Silvio Berlusconi’s Forza Italia party and Matteo Salvini’s far-right League.

The Eurosceptic, anti-immigration coalition takes over the eurozone’s third largest economy at a time of soaring inflation, an energy crisis and war in Ukraine.

European Commission President Ursula von der Leyen said Saturday she had a “good first call” with Meloni, adding: “I count on and look forward to constructive cooperation with the new government on the challenges we face together.”

Chancellor Olaf Scholz of Germany later said he looked forward to “working closely together with Italy in EU, NATO and G7” – a sentiment Meloni reflected in responses to congratulatory messages on Twitter.

Italy’s La Stampa daily spoke of a “European beginning” on its front page on Sunday. “Meloni: down to work, with pride”, headlined the Corriere della Sera.

On Saturday, Meloni and her 24 ministers were sworn in before President Sergio Mattarella at the Quirinal Palace in Rome, once home to popes and kings of Italy.

She declared her intention to get “straight to work”.

Meloni’s ministerial experience is limited to three years as youth minister under Berlusconi’s 2008-2011 government, while her party has never held power.

Meloni was a fan of late dictator Benito Mussolini as a teenager, but has managed to distance her party from its neo-fascist roots. 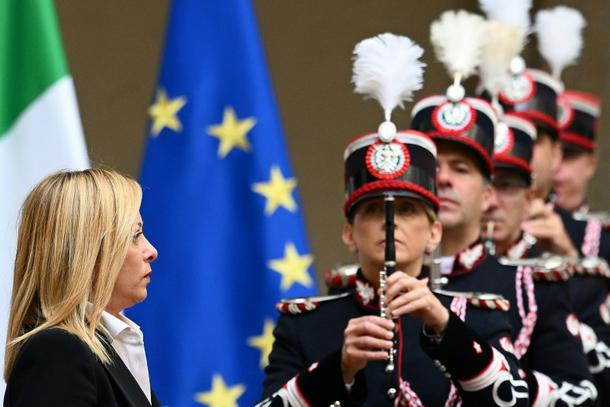 She presents herself as a straight-talking “Christian mother”, a defender of traditional values and Italy’s national interests, particularly in Brussels.

Her party no longer wants Italy to leave the EU’s single currency but remains strongly Eurosceptic, as is the League, which won nine percent in the elections.

However, she named committed European Antonio Tajani, a former president of the European Parliament who co-founded Forza Italia with Berlusconi, as foreign minister and deputy prime minister.

In an attempt to reassure investors that Italy’s debt-laden economy was safe in her hands, Meloni also appointed Giancarlo Giorgetti as economy minister.

Giorgetti, who served as minister of economic development under Draghi, is considered one of the more moderate, pro-Europe members of Salvini’s League.

Salvini will serve as deputy prime minister and minister of infrastructure and transport.

He had wanted the role of interior minister, a post he previously held between 2018 and 2019. That went instead to a technocrat, Rome prefect Matteo Piantedosi.

The talks to form a government had been overshadowed by disagreements within Meloni’s coalition on one of the biggest issues facing Europe – the response to Russia’s war in Ukraine.

She was forced to clarify her strong support for Kyiv and EU sanctions against Moscow after Berlusconi was recorded defending his old friend President Vladimir Putin.

Salvini, too, is a long-time fan of Putin and has criticised Western sanctions imposed on Russia over its invasion of Ukraine.

On Saturday Meloni again affirmed her desire to work with NATO, which she described as “more than a military alliance: a bulwark of common values we’ll never stop standing for”.

Meloni said Italy would “always be on the side of the brave people of Ukraine”.

But the tensions with her allies reinforce doubts as to how long she can keep her coalition together, in a country that has had almost 70 governments since 1946.

Shortly after the handover ceremony, Pope Francis noted the start of the new government in his weekly Angelus and offered his prayers for “unity and peace in Italy”.