Battling the cold in the trenches of eastern Ukraine 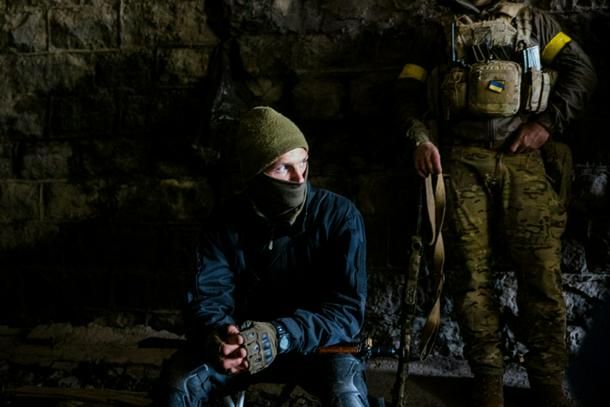 A Ukrainian soldier looks on in the town of Bakhmut, in eastern industrial Ukraine's Donbas region

DONETSK REGION (Ukraine) (AFP) - With “tactical socks”, NATO standard sleeping bags and even a sauna, a unit of soldiers from Ukraine’s 5th brigade is preparing for winter in a trench on the eastern front.

“Winter in Donbas is hell. It is a steppe climate with icy nights and temperatures can go down to minus 30 degrees Celsius (minus 22 Fahrenheit),” said one of the soldiers, Yury Syrotiuk.

“There is no forest, the wind blows through everywhere. I was here in 2014 and it was unbearable,” the 46-year-old said.

This part of the front has remained relatively static in the conflict but Russian forces are just 700 metres away and there is frequent artillery fire.

Still, life goes on in the maze of trenches.

The unit of soldiers and their cat John are deployed in the trenches for a week at a time before they are rotated out.

Following an internet tutorial, they have built a sauna that can also function as a hammam one metre (three feet) underground.

The sauna measures just two square metres and is heated by a wood-fired stove. 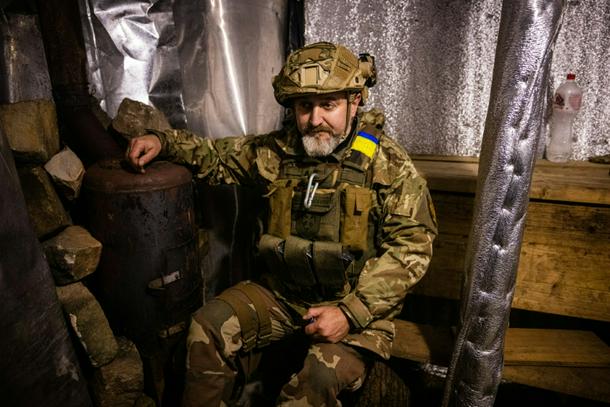 A Ukrainian serviceman displays a sauna, build in a trench on the front line in eastern Ukraine's Donetsk region

The opening and the insides are covered in silver-coloured insulating material.

An ammunition crate by the entrance acts as changing room for the soldiers who enter the sauna naked and wash themselves inside.

Water or snow in a bucket creates the steam.

“After living in the mud, you come out like a new person,” said Syrotiuk, a bearded former local official from the capital Kyiv who has been at the front since February.

The underground camp, which is covered in camouflage netting, is a sea of mud that sticks to the soles of soldiers’ boots.

Before entering the trench used for living quarters and the kitchen, soldiers have to wash their boots on a metal tube.

Inside, the most valued object is the “burzhuyka” – a small wood-fired stove with a chimney which keeps everyone warm.

Soldiers put their hands near it and then place them between their chests and their bullet proof vests to warm their bodies.

The other home comfort is a gas heater used to make piping hot tea and coffee.

Before entering the insulated sleeping area, where soldiers lie down on wooden crates, everyone has to remove their boots.

A plastic thermometer decorated with pink flowers shows 22 degrees Celsius inside, while outside it is 5 degrees on an autumn morning.

The unit commander, who goes by “Losha”, said the soldiers have received sleeping bags from volunteers that are supposed to be good up to minus 30 degrees Celsius. 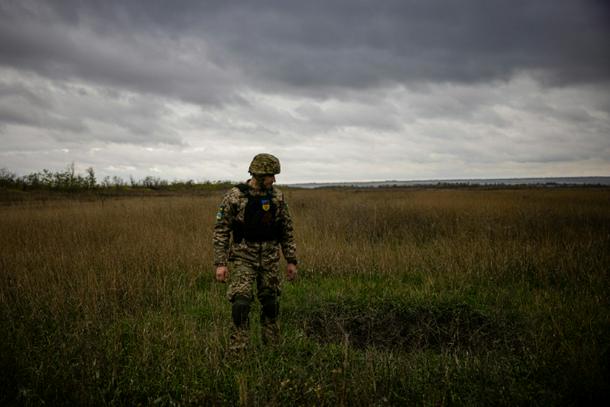 “With these you can sleep in the snow,” he said.

The soldiers have also been sent raincoats, special underwear including leggings and “tactical socks” to avoid “trench foot” – a bane for soldiers in the First World War.

“But what warms us up even more than socks or NATO standard sleeping bags, are the words, the calls and the little drawings of our loved ones,” Syrotiuk said, smiling.