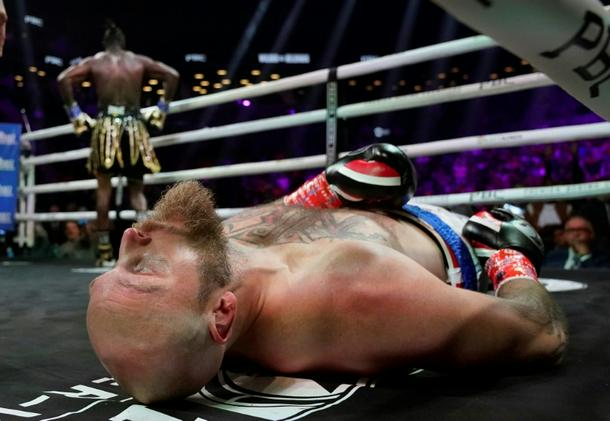 Former world heavyweight champion Deontay Wilder, left, poses moments after knocking out Finland's Robert Helenius, front, in the first round of their fight in New York

New York (AFP) - Former world heavyweight champion Deontay Wilder made a spectacular triumphant return after a year-long layoff, knocking out Finland’s Robert Helenius in the first round on Saturday.

Wilder stopped Helenius after two minutes and 57 seconds with a powerful right hand punch to the face, improving the American’s record to 43-2 with one drawn and 42 KOs.

“It was a great night,” Wilder said.

Wilder, his back against the ropes, answered a combination with a short but solid right to the nose of Helenius, who fell to the canvas on his back as Wilder walked away, his night complete after three punches.

“I had to take my time. I was making him reach,” Wilder said. “I wanted to be mobile, agile and hostile. I set him up, allowed him to reach and then when he reached, I attacked.”

Doctors rushed to the 38-year-old prone Finnish fighter, who slowly rose to his knees. Helenius, a former Wilder sparring partner whose record fell to 31-4, eventually departed the ring under his own power.

A week shy of his 37th birthday, Wilder climbed into the ring for the first time since an 11th-round knockout defeat to Britain’s Tyson Fury last October. Wilder had lost his World Boxing Council crown and unbeaten status to Fury in 2020.

“We wanted to make this fun again,” Wilder said. “You can do this so long it can be a job, just something you are doing. We made it fun. It paid off big time.”

Wilder’s victory likely sets up a 2023 fight against compatriot Andy Ruiz, a former world champion, with that winner poised for a chance at the WBC title.

But Wilder didn’t rule out trying to fight Ukraine’s unbeaten Oleksandr Usyk, who owns all the heavyweight division’s other major titles.

“Who’s next? I’m down for whatever,” Wilder said. “Andy Ruiz, Usyk or whatever. I’m back. The excitement is back in the heavyweight division.”