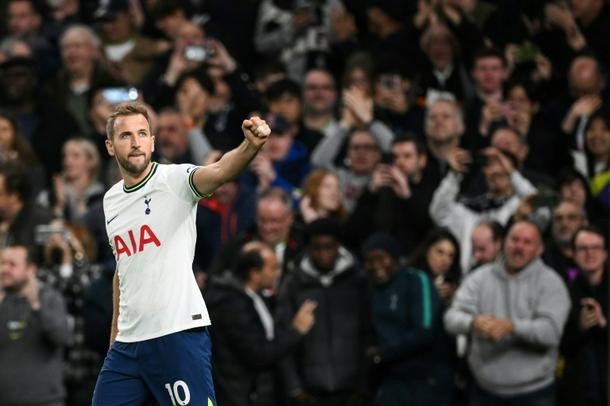 Spot on: Harry Kane scored the opener for Tottenham from the penalty spot

London (AFP) - Antonio Conte is hoping Richarlison will not be sidelined for long after the Brazilian limped off during Tottenham’s 2-0 win over Everton on Saturday which moved them within a point of the top of the Premier League.

But the loss of Richarlison against his former club to a calf injury early in the second half is a concern for Conte amid a hectic club schedule and for the player just a month out from the World Cup.

“He will have an MRI to understand it tomorrow, we hope it is not serious,” said Conte.

“We have to be really happy because in my opinion we played a good game, we created a lot of chances and had injuries during the game.

“That could have created something negative but we found a right solution to the game.”

Not for the first time this season, Spurs were far from a slick attacking force.

However, Kane’s form is covering over any cracks as the England captain took his tally to 10 goals for the season.

Kane then played a part in setting up the second four minutes from time as the ball eventually broke for Hojbjerg and the Dane’s deflected effort found the top corner.

Spurs remain in third, but are now only behind Manchester City on goal difference ahead of the champions’ trip to Liverpool on Sunday.

Everton arrived at the Tottenham Hotspur Stadium with the joint best defensive record in the Premier League and their new-found solidity under Frank Lampard ensured there would be no repeat of the 5-0 thrashing the Toffees suffered when the sides last met in March.

However, scoring goals has been the issue for Lampard’s men and the lack of threat from the visitors meant there was little doubt over the outcome after Kane had smashed home from the spot just short of the hour mark.

“The penalty is the difference in the game,” said Lampard. “I thought until then everything we were doing was good.”

Jordan Pickford had been largely untroubled in a tepid first 45 minutes from the hosts, but Tottenham cranked up the pressure after the break.

Pickford beat away a volley from his England teammate Kane before Son Heung-min headed tamely into the arms of the Everton keeper.

However, Pickford was to blame for the opening goal as he spilled Matt Doherty’s shot and then brought down Kane as he tried to collect the loose ball.

Kane had uncharacteristically fired over one of two penalties he took in Tottenham’s 3-2 win over Eintracht Frankfurt in midweek.

But normal service was resumed as he drilled the ball into the bottom corner despite Pickford going the right way.

Everton were forced to come out of their shell in the final 15 minutes as Lampard threw on Dominic Calvert-Lewin in search of an equaliser.

Yet, that only offered Spurs more space on the counter-attack and when Kane fed Rodrigo Bentancur down the right, the Uruguayan picked out Hojbjerg, who used the run of Son to distract the Everton defence before firing past Pickford.