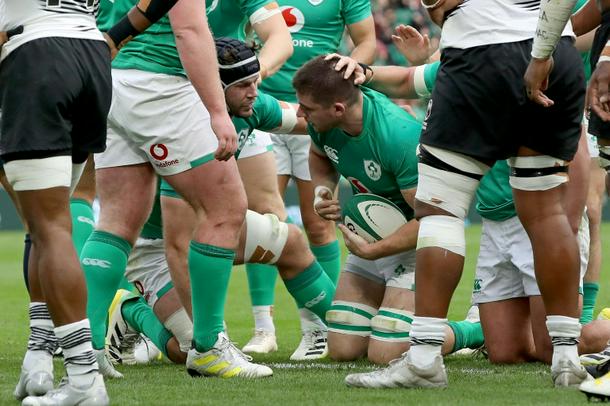 Dublin (AFP) - An unimpressive Ireland recorded their 11th successive home Test win on Saturday beating a flamboyant but undisciplined Fiji side 35-17 at Lansdowne Road in an Autumn Nations Series match.

The Fijians scored the two most eye-catching tries of the game but two yellow cards and the sending off of Albert Tuisue early in the second-half robbed them of any realistic chance of a first ever win over their opponents.

The Irish scored five tries – all converted – but few of the fringe players who played will have done their chances much good of breaking into the starting line-up for the final Test against Australia next Saturday.

Nick Timoney, though, will remember the match fondly as the second row forward touched down twice – his first tries for his country.

“It is very underwhelming for us but fair play Fiji.”

Farrell said there were no excuses for the Irish falling well below the standards that has seen them rise to number one in the world rankings.

“We got into their 22 time and time again, and yes because of illegalities or the stop-start nature, we lost our flow, but we weren’t clinical enough by any stretch of the imagination,” said Farrell.

“You fast forward to the last play of the game, us kicking the ball out against 14 men with the scrum ready to play when the game is already won probably sums the game up.”

Fiji made an explosive start Kalaveti Ravouvou, scoring a superb try after a delightful passing move which caught the Irish flat-footed – Teti Tela converting for 7-0.

The British & Irish Lion star ruefully shaking his head having not fully recovered from the hamstring problem that kept him out of last Saturday’s win over the Springboks.

The Irish were rocked and took their time to get their act together before Timoney went over for his first Test try in his third match for his country. Joey Carbery converted to pull them level at 7-7.

The Fijians were reduced to 14 men shortly before the 20th minute as prop Manasa Saulo was sin-binned by Mathieu Raynal.

The hosts had been unable to take advantage of a similar situation against South Africa last Saturday – failing to score when Cheslin Kolbe was yellow-carded – but Fiji proved easier to breach.

It only took a minute for the Irish to make them pay as Timoney scored his second try. Carbery converted for 14-7.

Tela slotted over a penalty shortly afterwards for 14-10.

The Irish, though, extended their lead, Jamison Gibson-Park’s long pass picking out the unmarked Robert Baloucoune, who touched down.

The Fijians managed to keep the Irish out for the remainder of the half but their indiscipline cost them early in the second period.

Raynal reached for a red card in the 46th minute to send off Tuisue after a high tackle on Carbery.

As Tuisue trotted off Jack Crowley came on for his Ireland Test debut replacing Munster team-mate Carbery, who went for a head assessment and did not return.

Raynal was busy, wielding a yellow at Apisalome Ratuniyarawa in the 51st minute reducing Fiji to 13 men.

The Irish, though, made heavy weather of the superior numbers only scoring their fourth try on the hour as Mack Hansen scored in the corner. 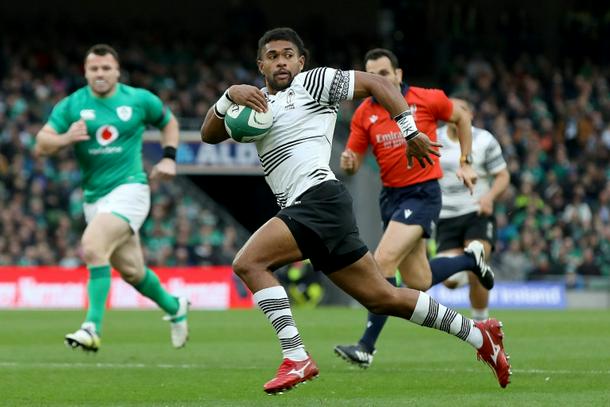 Simione Kuruvoli races away for a Fiji try against Ireland

Crowley came up with a conversion from the touchline for 28-10.

The Fijians, though, hit back with a stunning try, created by the genius of Jiuta Wainiqolo, who burst through the Irish midfield.

He had the presence of mind to pass one-handed to Simione Kuruvoli, who outsped Hansen to touch down. Ben Volavola converted for 28-17.

The hosts finally put the match to bed with a try by grizzled veteran prop Cian Healy. Crowley converted for 35-17.