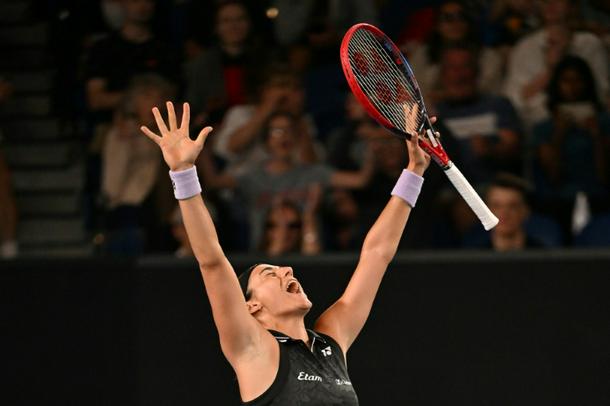 Melbourne (AFP) - Caroline Garcia fought back after a disastrous first set to reach the last 16 at the Australian Open on Saturday and avoid a massive upset against world number 158 Laura Siegemund.

“She played a great match, she was able to read me very well,” said a relieved Garcia, the fourth seed.

“I was getting more stressed and at the beginning I was super nervous.”

Garcia will play either 19th seed Ekaterina Alexandrova of Russia or Magda Linette of Poland, the world number 45, next.

It was a rollercoaster ride on Kia Arena, one of the smaller stadium courts at Melbourne Park, in front of a loud but well-behaved night session crowd.

“I got a lot of support and that means a lot, and thank you so much,” Garcia said of the rocking atmosphere. “It was great. I didn’t know what to expect when I came here.”

Siegemund put pressure on Garcia from the off as she bid to become the first player ranked outside the top 150 to reach the last 16 of the Australian Open since 2017.

The German broke Garcia’s second service game and raced into a 4-1 lead.

Siegemund was visibly growing in confidence and she outlasted Garcia in the next game to secure a 5-1 lead on a fourth break point, before serving out for the set in just 34 minutes.

“I was on the edge,” admitted Garcia. “Then I remember telling myself it’s the Australian Open third round and I have a shot to go to the second week.

“At least I have to try, even if I play badly.”

The second set was a different story, with Garcia this time the player gaining control.

She broke Siegemund in the sixth game for a 4-2 lead which proved decisive and the Frenchwoman took it to a decider after an hour and 15 minutes.

“Sweet Caroline” boomed around the stadium before the start of a drama-filled final set in which Garcia, now full of confidence, broke immediately.

But Siegemund struck straight back to spark a ding-dong tussle full of quality shotmaking, with the German saving two match points at 5-3, 15-40.

A time-clock violation then riled Siegemund, who remonstrated with the umpire, and although she composed herself enough to win the next point, Garcia was not to be denied.

She created a third match point and sealed the victory with a fierce forehand return that the German could only parry into the net.

Garcia roared back into the top five last year after a torrid couple of years where injuries caused her form to desert her and she suffered with an eating disorder.

Since June she has won 40 Tour-level matches including titles on all three surfaces – clay, grass and hard courts – to climb back from 74th in the world at the start of last season.