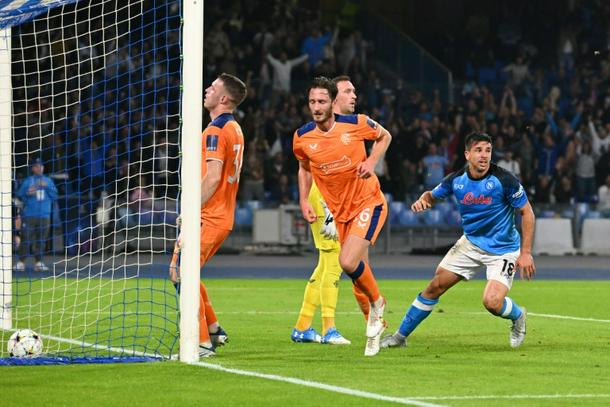 Naples (Italy) (AFP) - Giovanni Simeone made sure that Napoli maintained top spot in Champions League Group A on Wednesday with a double in his team’s comfortable 3-0 win over Rangers.

Luciano Spalletti’s side extended their all-competitions winning streak to a club-record 12 matches thanks to Simeone’s classy finishes in five first half minutes and a late Leo Ostigard header.

Simeone is one of just two Argentines to have scored four goals in his first four Champions League matches, the other being his father Diego, who suffered a painful elimination with Atletico Madrid while Napoli strolled past the Scots.

Wednesday’s match was only Simeone’s second start of the season as he battles with Italy international Giacomo Raspadori and Victor Osimhen for a place in the striker’s berth of a team which has now scored 46 goals in Serie A and Europe.

“I always look to give everything, today we played really well,” Simeone told Sky in Italy.

”(Spalletti) gave me freedom to be myself, attack the space… I’m always available when the coach asks me to be there, I’ll always look to help the team.”

Napoli, who were already in the last 16, stay three points ahead of Liverpool and will win the group as long as they avoid a four-goal loss at Anfield next week.

Rangers are stuck on no points after their fifth straight defeat in the competition and can only make it into the Europa League if they manage the unlikely feat of beating Ajax by five goals in Glasgow.

“Obviously we’re disappointed we lost although we can take some positives out of that,” Rangers captain James Tavernier told BT Sport.

“We let in two easy goals in the first half and then I felt we had two big chances which could have maybe levelled the game.”

Simeone opened the scoring in the 11th minute with a classy low finish from tricky angle after collecting Giovanni Di Lorenzo’s long ball over the top.

Ostigard made sure the scoreline reflected the one-side nature of the match with a header of his own, this time scoring from a corner when completely unmarked on his Champions League debut.

The Norwegian’s strike took Napoli’s goal tally to 20, making them the first Italian side to score that many goals in a Champions League group.