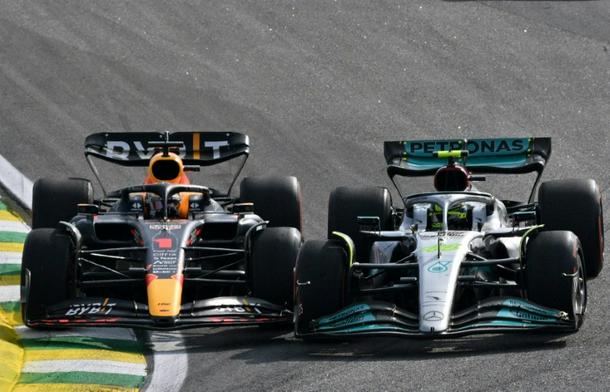 Sao Paulo (AFP) - George Russell powered to his maiden Grand Prix victory ahead of team-mate Lewis Hamilton on Sunday as Mercedes ended their barren run with a triumphant one-two at the Sao Paulo Grand Prix.

The 24-year-old English driver resisted the pressure from compatriot Hamilton to finish 1.529 seconds clear of the seven-time champion.

“This is just the beginning,” said an elated Russell after winning in his 81st Grand Prix.

Hamilton, winner of a record 103 Grands Prix, added to Mercedes joy after a frustrating season.

“Congratulations to the team and thank you – this is an amazing result,” he said.

Two-time champion Max Verstappen was sixth for Red Bull after pitting following a seventh lap collision with Hamilton, for which he was penalised, and charging through the field.

Sergio Perez was seventh in the second Red Bull ahead of Alpine’s Esteban Ocon, Valtteri Bottas of Alfa Romeo and Lance Stroll of Aston Martin.

“What an amazing feeling,” added an emotional Russell after climbing from his car. “A huge thank you to the team to make this happen. It’s been an emotional rollercoaster.”

“Lewis put me under so much pressure.”

It was Mercedes first win of the season and came in a sizzling and frantic race that began on a hot afternoon, with a track temperature of 51 degrees Celsius.

The race began in spectacular style. Russell, who had taken the p[ole for the main race by winning Saturday’s sprint, making a near-perfect start, followed by Hamilton.

Behind them, on lap one, Daniel Ricciardo and Kevin Magnussen collided when the Australian’s McLaren clipped the Dane’s Haas and spun him before hitting him again.

A Safety Car came out. The luckless Magnussen, Friday’s hero after securing his maiden pole aheasd of the sprint, radioed in. “Sorry, guys,” he said. “I’m out. I got a massive push.”

The race resumed on lap seven with another explosion of drama as Russell accelerated clear ahead of two collisions – Verstappen and Hamilton making contact at Turn One, where the Dutchman suffered a damaged front wing, and Leclerc avoiding the wall at Turn Six after clashing with Norris.

Verstappen and Leclerc both pitted. Red Bull replaced Verstappen’s front wing in only 10 seconds before the champion re-joined 17th only to learn that he had a five-second penalty for causing the collision.

“Where did they expect me to go?” a defiant Verstappen told his team, echoing his battle with Hamilton in 2021. “He just closed the door on me, but it doesn’t matter.” 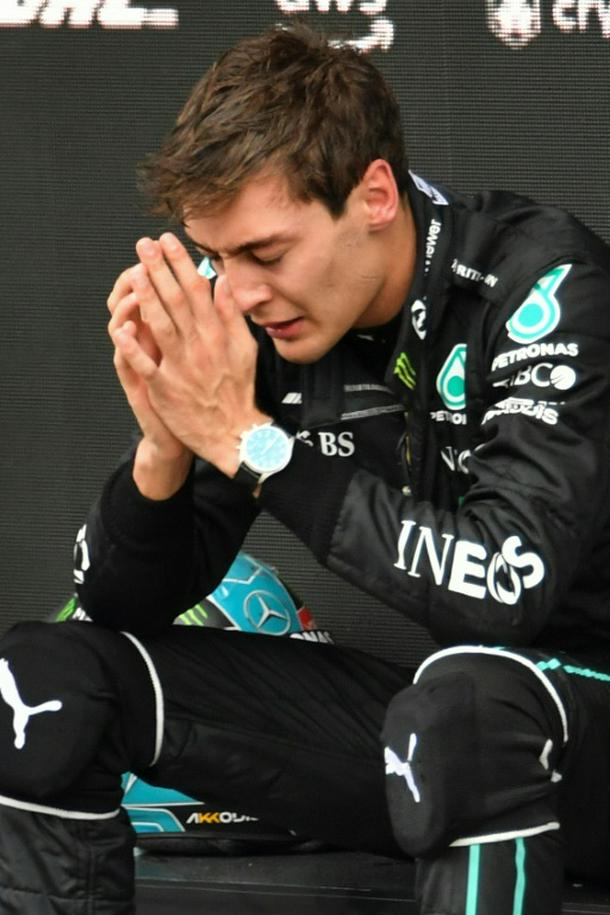 Hamilton, having fallen to eighth after his off-circuit recovery, battled back to fourth by lap 16 as the contest settled down.

Sainz was the first of the leaders to stop, switching tires, as Hamilton inherited third. The Spaniard’s right rear billowed with smoke as Ferrari fought to retrieve a tear-off from a brake duct.

By lap 25, Verstappen was 12th before pitting again, serving his five-second penalty as Perez and Russell also came in. This blur of pit lane action left Hamilton leading ahead of Russell and Vettel, who pitted on lap 27.

Hamilton stayed out until lap 30, and re-joined fourth, rising to third when the Spaniard pitted again on lap 37.

Roared on by his ‘home’ fans, Hamilton caught and passed Perez for second on lap 45 before pitting on lap 49. Russell followed him in and retained his lead, but Sainz took second.

Hamilton immediately cut two seconds out of Sainz’s advantage before Norris lost power and idled to a halt and a Virtual Safety Car (VSC) was deployed.

Sainz took his chance and pitted for soft tires, leaving the two Mercedes ahead of Perez before a full Safety Car was signalled, reducing Russell’s 11-second cushion.

“So, are we racing?” Russell asked as his team-mate rose to second setting up a potential victory duel between the ‘silver arrows’. “Yes, you are racing. Just be respectful,” came the pit-wall reply.