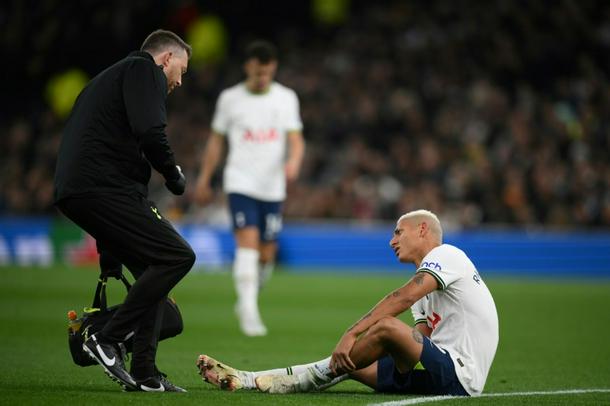 Richarlison limped off during a 2-0 win over his former club Everton on Saturday.

The 25-year-old has established himself as Brazil’s first choice centre-forward with 17 goals in 38 international appearances.

A tearful post-match interview after the Everton game suggested his World Cup was at risk with Brazil’s opening game against Serbia just over a month away on November 24.

However, Conte is hopeful of having Richarlison back before he heads off to Qatar, although he will be out for Wednesday’s trip to Manchester United.

“I can confirm this, that the player is not risking to not play at the World Cup,” Conte said at his pre-match press conference on Monday.

“It’s an injury but not so serious. He has a problem in his calf. I think he needs a bit of time to recover and then to be fit. I hope for him to play other games with us before the World Cup but for sure the injury is not so serious.

“I’m happy for the player because to play in the World Cup is the dream for every single player and for this reason I am happy for him.”

Richarlison’s absence has left Conte short on forward options other than Harry Kane and Son Heung-min, but Dejan Kulusevski could make his return from injury at Old Trafford.

“We have to go day-by-day with him and the medical department are working a lot to try to recover him, but we don’t know for the game against United,” added Conte.

Victory against United will move Spurs to within a point of Premier League leaders Arsenal.

Conte has helped transform Tottenham’s fortunes since taking charge little under a year ago, but his contract expires at the end the season.

Spurs have an option to extend the Italian’s deal by a further year, but Conte said his immediate focus is on an intense period ahead of the World Cup.

“The most important thing is to try to prepare for the game very well and for the period,” said Conte.

“I will speak to the club about this situation and we will find the best solution for everybody.”