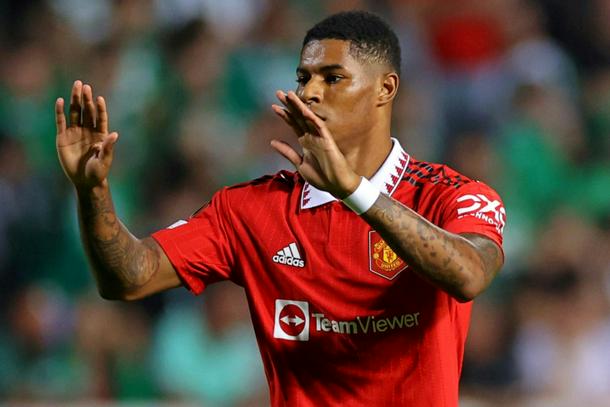 Manchester (United Kingdom) (AFP) - Erik ten Hag says Marcus Rashford must be more clinical in front of goal but is confident Manchester United have enough firepower in their ranks to achieve their aims this season.

It took until the 34th and final shot of the evening for United to beat inspired Omonia Nicosia goalkeeper Francis Uzoho in the Europa League on Thursday as substitute Scott McTominay sealed a 1-0 stoppage-time victory.

United’s bluntness in front of goal was frustrating but they still won their third straight game in all competitions after their 6-3 mauling at the hands of Manchester City earlier this month.

Erling Haaland, who scored a hat-trick in that match, now has 15 goals in just nine Premier League appearances – two more than United have managed in their first eight league games of the season.

But United manager Ten Hag said he was confident he had players at Old Trafford with the capability to score 20 goals in a season.

“I think we have in our squad players who can score that number of goals, but you can also divide it because we have many goalscorers across the whole offensive department,” he said ahead of his team’s home match against Newcastle on Sunday.

“But I think also we need something from midfield and the defensive department.”

United’s top scorer so far this season is Rashford, who has five goals in all competitions.

The England international should have added to that tally given his 10 attempts against Omonia but has at least shown positive signs under Ten Hag after a miserable 2021⁄22 season.

“He did a lot of things well but finally he knows that he has to be more clinical and he had to score a goal,” said the Dutch boss.

“But I know sometimes it’s the game, it’s not your night and it’s about the form of the day.

“But it can change to another game because I think he’s in a really good run and that shows in the chances he creates.”

One player who has shown an eye for goal in the early weeks of his United career is Anthony, who is looking to extend his record of scoring in every Premier League appearance after netting three in his first three games.

“I think we have seen now his dribbling capabilities, his speed, his finishing, also creating,” said Ten Hag of the player he also coached at Ajax.

Cristiano Ronaldo could drop back to the bench with Ten Hag expecting Anthony Martial to be fit for Newcastle’s trip to Old Trafford but club captain Harry Maguire remains out due to injury.