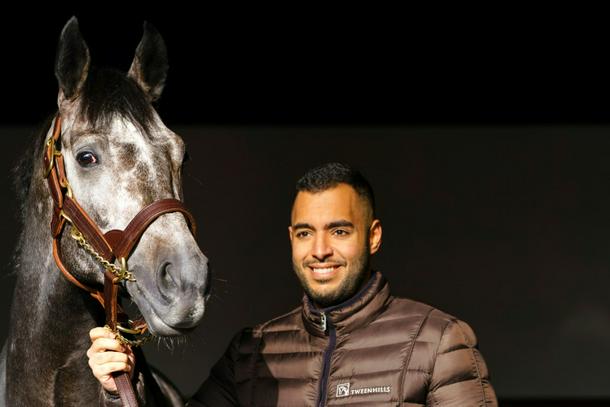 Newmarket (United Kingdom) (AFP) - Sheikh Fahad Al-Thani, the driving force behind British Champions Day at Ascot, was a student when he fell in love with racing and it is students who he and his brothers see as the future lifeblood of the sport, Qatar Racing’s manager David Redvers told AFP.

Around 26,000 spectators – including 600 students who pay 15 pounds ($17) – are expected to attend Champions Day on Saturday with the headline attraction Baaeed bidding to end his career unbeaten with an 11th win in 11 races.

The number of students is well down on the 3,000 that attended in the past and whilst the straight-talking Redvers praises the work done by Great British Racing – racing’s official marketing and promotional body – he admits “more could be done” to boost the figures.

The crowd will be more than attended Europe’s most prestigious race the Prix de l’Arc de Triomphe earlier this month – estimated at between 22,000 to 25,000 – which Redvers says is “fantastic”.

“It is still not good enough,” he told AFP at the yearling sales in Newmarket.

“We have to continue to innovate as much as we can.

“The most compelling argument going is there is nowhere else you see so many high class horses.

“We have to get the message out there a bit better, there is more we can do and I am slightly frustrated we have not done more.”

Persuading students that going racing or getting involved in it seems ever more pressing with racing attendances taking a hit – figures were 27 percent down in August compared to last year.

Redvers says it is a “core belief” for Sheikh Fahad and his brothers why their Qatar Investment and Project Development Holding Company (QIPCO) have backed Champions Day since the inaugural meeting in 2011.

“Sheikh Fahad was a student in London and when he turned on the television and watched racing he got hooked, thank God for us,” said Redvers.

“He loved the banter, loved the history and unpicking the puzzles.

“When we are students that is the time when people’s minds are most fertile and open to concepts and ideas.

“So it’s our responsibility to sow the seed and attract those who are not already involved due to a family connection.

“Attracting the young seems so blinkingly obvious and why we should be targeting them.”

Sheikh Fahad went from being a student to sitting beside the late Queen Elizabeth II with as he told AFP her telling him he was “allowed to scream” his star Roaring Lion home to win the race named in her honour on Champions Day in 2018.

Redvers admits he could be loosely termed a student – his sole interest appropriately for one whose father was an artist was History of Art – when he fell in love with it working on a stud farm in Australia.

But for those students that do fall in love with horse racing, Redvers serves as a salutary reminder it is also a school of hard knocks.

In his early 20’s he got into serious financial difficulty when he was unable to sell shares in horses he had bought.

He even resorted to one day sitting outside his home cradling a shotgun and debating whether to blow off one of his fingers which carried a 10,000 pound insurance policy if he lost a digit in an accident.

He decided against it when he realised that pay out would be a mere drop in the ocean.

“Happily there are some incredibly kind people in this industry who helped me look forwards after that traumatic time.

“My journey when I think about it is amazing but when you go into that sales ring and look at the people doing really well most of us are risk takers.

“There are degrees of skill in choosing a champion but there is a greater degree of luck.

“Do I feel comfortable? No, because there are always people snapping at your heels but I am incredibly lucky to be doing what I love.”