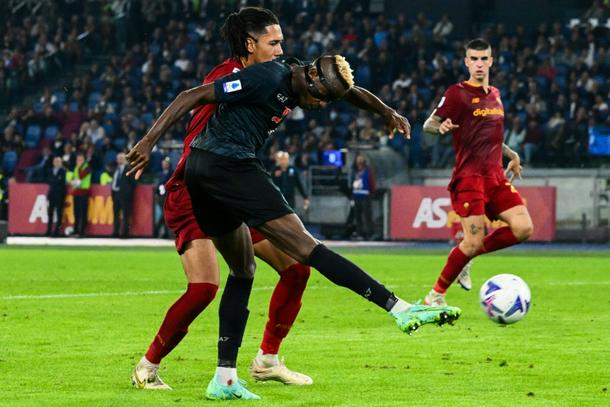 Milan (AFP) - Victor Osimhen extended Napoli’s lead at the top of Serie A to three points on Sunday with the only goal in a hard-fought 1-0 win at Roma, their 11th on the bounce in all competitions.

Nigeria forward Osimhen crashed in his third goal is as many games with 10 minutes remaining of his first start since early September to hand Napoli a win at one of their fiercest rivals.

Luciano Spalletti’s side took advantage of Atalanta’s 2-0 home defeat to Lazio earlier on Sunday to move further ahead of the pack and become the only unbeaten side left in Italy’s top flight.

Roma are seven points back in fifth after a dogged, battling performance at the Stadio Olimpico which lacked in invention and but largely kept a lid on possibly Europe’s most exciting team.

Napoli thought they had a chance to open the scoring from the penalty spot when referee Massimiliano Irrati blew for a foul on Tanguy Ndombele by Roma goalkeeper Rui Patricio.

But as a chorus of boos and whistles rolled down the stands from fans outraged at penalising Patricio when he clearly took the ball first, Irrati checked the pitchside monitor and overturned his own decision.

Roma didn’t have a single shot on target in the first half and struggled to create anything after the break, when Napoli slowly began to threaten.

Eljif Elmas was denied a close-range tap-in on the hour mark by a magnificent Chris Smalling block and from the resulting corner ex-Roma man Juan Jesus slashed wide after being set up perfectly by Osimhen.

Osimhen dragged a colossal chance wide with just Patricio to beat after a lightning Napoli counter-attack in the 70th minute.

But the 23-year-old rattled in a much more difficult effort 10 minutes later, charging on to Matteo Politano’s booted long pass before holding off Smalling and claiming the three points with a rocket of a finish.

Atalanta had the chance to move a point in front of Napoli ahead of their win at Roma but Lazio put in the perfect away performance without injured Italy striker Ciro Immobile to move into the top four. 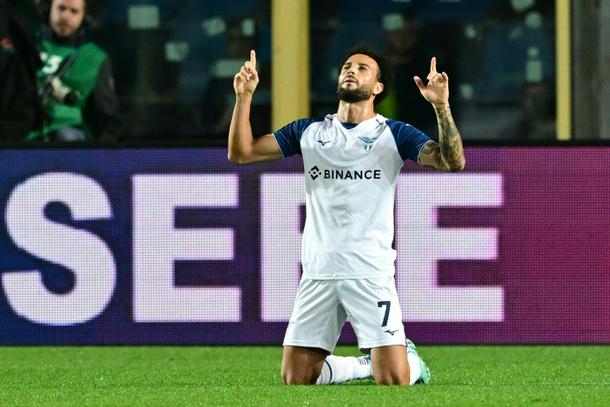 Mattia Zaccagni’s tap-in at the end of a beautifully-worked team move put Lazio ahead in the 10th minute at the Gewiss Stadium.

And Felipe Anderson, replacing Immobile in a false nine forward role, ensured Lazio would leapfrog Atalanta into third place when he drilled in the away side’s second eight minutes after the break following a burst down the left from Adam Marusic.

Maurizio Sarri’s side are level on 24 points with Atalanta, who sit fourth, after winning five of their last six league matches during which time they haven’t conceded a single goal.

“This year we play every match like a team which fights for every ball and you can see that in the results,” Anderson told DAZN.

Atalanta barely created a chance, a far cry from the thrilling teams Gian Piero Gasperini has created in Bergamo in recent seasons.

They will be without key forward Luis Muriel at Empoli next weekend as the Colombian was sent off late on for two bookable offences.

Udinese’s fairytale start to the season hit another bump in the road as Torino ran out surprise 2-1 winners at the Dacia Arena.

Andrea Sottil’s team were in sight of the Serie A summit two weeks ago but two draws and Sunday’s loss to ninth-placed Torino leave them sixth, eight points off the pace.