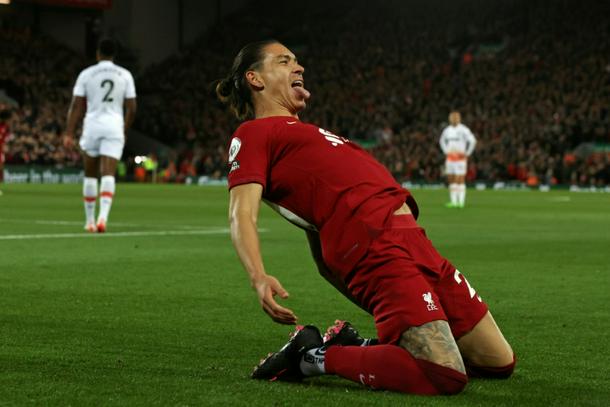 Liverpool (AFP) - Jurgen Klopp insisted Darwin Nunez is a “massive talent” after the Liverpool forward extended his side’s revival and maintained his own resurgence with the decisive goal in Wednesday’s 1-0 win against West Ham.

Klopp’s team earned a third successive win in all competitions thanks to Nunez’s strike and a missed penalty from West Ham’s Jarrod Bowen in the first half at Anfield.

It was Nunez’s third goal in his last four appearances as the former Benfica star begins to make himself at home after a disappointing start following his expensive summer move.

The 23-year-old was sent off in his first Premier League game at Anfield against Crystal Palace in August, fuelling unflattering comparisons with Manchester City’s prolific striker Erling Haaland.

But it was too soon to write off Nunez and following Sunday’s 1-0 win against City, Liverpool have recorded consecutive Premier League victories for only the second time this season.

“We scored a wonderful goal and with a bit more Darwin could have had a hat-trick. He was outstanding,” Klopp said.

“He is a massive talent and is only 22. He came from Portugal and he wasn’t there for long. He is a really big talent and we’re really excited about him.”

Klopp was in the spotlight after his red card for berating the officials during the City clash.

With Diogo Jota and Luis Diaz out for the foreseeable future, Nunez’s fifth goal this season was a welcome sight for Klopp, ensuring the German was in a more peaceful mood on the touchline.

“I don’t stand here thinking it should be an easy game for us, but we got the result and I think we deserved the result. It is three points more, massive,” Klopp said.

“It was an outstanding penalty save. It was a really well-taken penalty, right in the corner, and I had no idea how Ali (Alisson Becker) did that.”

West Ham have only won once at Liverpool since 1963, so it was little surprise Hammers boss David Moyes admitted this week that “Anfield is probably as hard a place as you can go in the world to try and win a game”.

Moyes knows that better than most after his winless run at the famous old stadium extended to 18 top-flight games.

Klopp’s men were soon on top and Nunez fired just over from Thiago Alcantara’s pass.

Nunez opened the scoring in the 22nd minute as the Uruguay forward met Kostas Tsimikas’s cross with a header that arrowed inside the far post.

Nunez was inches away from doubling Liverpool’s lead with a fierce volley from 12 yards that smacked off the post.

After all their pressure, Liverpool nearly surrendered the lead on the stroke of half-time.

But when Bowen picked himself up to take the spot-kick, he saw his effort well saved by Alisson.

Henderson’s drive was tipped over by Fabianski early in the second half, with Nunez motoring past Thilo Kehrer to fire narrowly off target moments later.

Despite that flourish, West Ham finished strongly and Said Benrahma almost snatched an equaliser when he shot straight at Alisson after Gomez misjudged a cross.

Tomas Soucek looked certain to equalise in the final minutes but a brilliant block from James Milner preserved the points for Liverpool.