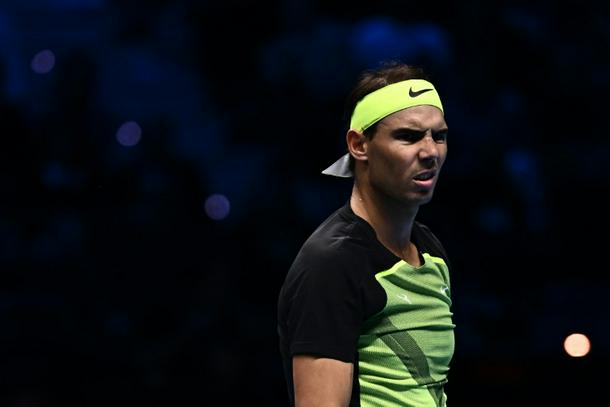 Rafael Nadal reacts as he heads to defeat against Taylor Fritz

Turin (Italy) (AFP) - Rafael Nadal suffered a disastrous start to his bid to win the ATP Finals for the first time after crashing to a 7-6 (7⁄3), 6-1 defeat to Taylor Fritz on Sunday.

The year-ending Finals is the only major trophy missing from Tennis icon Nadal’s list of honours but his straight-sets LOSS means he will struggle to escape the round-robin stage.

The 36-year-old realistically needs to win both his remaining matches against Green Group opponents Casper Ruud and Felix Auger-Alissime if he is to make the semi-finals.

Fritz is at the Finals for the first time in his career after replacing injured world number one Carlos Alcaraz and gave Nadal a torrid time with some aggressive tennis.

“I did a good job, protecting my serve, holding my serve and I did very well in tie-breaker,” said Fritz on court.

“Once I got through that I just wanted to do the same thing I was doing in the second set, protecting my serve and capitalise on break points when I got them.”

Ruud was also a straight-sets winner over Auger-Alissime, 7-6 (7⁄4), 6-4, in the day’s other singles contest. the Norwegian sits behind Fritz in the standings with the top two from each group progressing to the semis.

The world number four came through an uninspiring encounter in one hour and 51 minutes after claiming his one and only chance to break Canadian Auger-Alissime’s serve in game seven of the second set.

This season’s Roland Garros and US Open finalist then served out the rest of the set to claim the win.