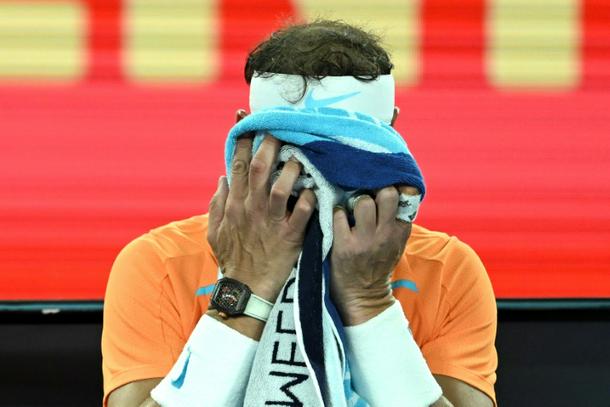 Melbourne (AFP) - Rafael Nadal said he was “destroyed mentally” after slumping out of the Australian Open with a second-round defeat Wednesday in which he struggled badly with a hip injury.

But the 36-year-old defending champion said he loved tennis and hopes to keep going, despite his latest injury disappointment.

The Spanish great hurt himself stretching for a shot in the second set against American Mackenzie McDonald, and while he battled on, his movement was hampered and he lost 6-4, 6-4, 7-5.

Crashing out in the second round was his earliest defeat at a Grand Slam since 2016.

Top seed Nadal said he wasn’t sure if it was a muscle or joint problem with his hip but it had been with him for “a couple of days”.

“Sometimes it’s frustrating, sometimes it’s difficult to accept, sometimes you feel super-tired about all this stuff in terms of injuries,” said the 22-time Grand Slam winner.

“Now it’s a tough moment. It’s a tough day and you need to accept that and keep going. You know, in the end, I can’t complain about my life at all.

”(I) just can’t say that I am not destroyed mentally at this time, because I will be lying. It’s hard for me. But let’s see, hopefully it’s nothing too bad.”

The Spaniard’s legendary career has frequently been haunted by physical frailties, with 2022 another rollercoaster year.

After winning the Australian Open, he suffered a stress fracture of the ribs in March before requiring daily pain-killing injections in his left foot to see him through to a 14th French Open title in June.

Then his bid for a third Wimbledon crown was shattered by an abdominal injury.

Asked why he kept going, Nadal replied: “It’s a very simple thing: I like what I do. I like playing tennis. I know it’s not forever.

“I like to feel myself competitive. I like to fight for the things that I have been fighting for almost half of my life or even more. And that’s it. It’s not that complicated to understand.”

But he also acknowledged that at his age it was getting harder to deal not only with injuries, but the recovery process then regaining fitness to compete at the level he expects.

“The last seven months have been, again, another tough period of time,” he said.

“I don’t know what can happen in the future. But I need to avoid again a long period of time outside (of the sport).

He added: “Let’s see how the injury is and then let’s see how I can manage to follow the calendar.”