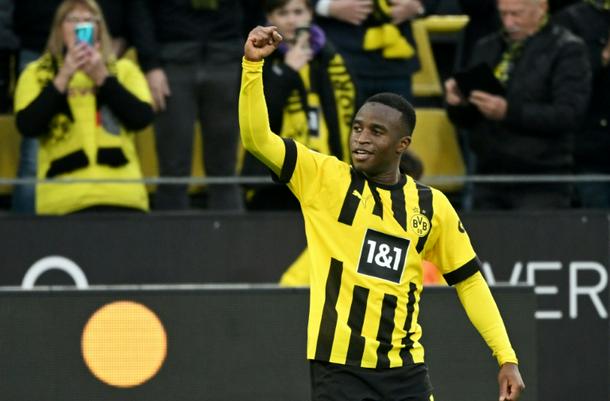 Borussia Dortmund forward Youssoufa Moukoko has re-signed with the German giants, ending speculation he may leave the club

Berlin (AFP) - Teenage striker sensation Youssoufa Moukoko has extended his contract with Bundesliga side Borussia Dortmund until 2026, the club announced on Saturday.

Moukoko, was set to become a free agent in the summer of 2023 and German media reported that several of Europe’s major clubs including Barcelona, Chelsea and Liverpool, along with Saudi-backed Newcastle, had indicated an interest in the youngster.

Moukoko, 18, came through Dortmund’s junior ranks after joining from St Pauli in 2016, scoring 141 goals in just 88 games before moving to the senior side.

The Germany striker debuted in the top grade in November 2020 just one day after his 16th birthday, becoming the youngest ever Bundesliga player in the process.

Just 27 days later, he scored his first senior goal to become the league’s youngest ever goalscorer.

Born in Cameroon before moving to Hamburg at the age of nine, Moukoko chose to represent Germany at youth level.

At the age of 17, he became the youngest ever Germany player when he made his debut in a pre-World Cup friendly against Oman, breaking a record which had stood for 68 years.

He came on as a substitute in Germany’s opening 2-1 loss against Japan at the Qatar World Cup.

Moukoko on Saturday told the club’s website staying in Dortmund was “a decision of the heart”.

“It’s no secret that I feel good at Dortmund,” Moukoko said.

“I played in the youth teams, took my first steps in professional football here and now I’m ready to take the next step in my development together with the club.

“Of course I was honored by the interest of other clubs, but in the end it’s a heart decision.”

Dortmund sporting director Sebastian Kehl, who had given Moukoko an ultimatum to make a decision before Sunday’s season re-start against Augsburg, praised the “exceptional” striker on Saturday in a prepared statement.

“It was important to us to be able to conclude the negotiations this week so that we all - and Youssoufa in particular - can start the football year 2023 in peace and fully focused on the sporting challenges.”

Moukoko has a strong relationship with Dortmund coach Edin Terzic, saying in November while on World Cup duty “I feel the trust of the manager”.