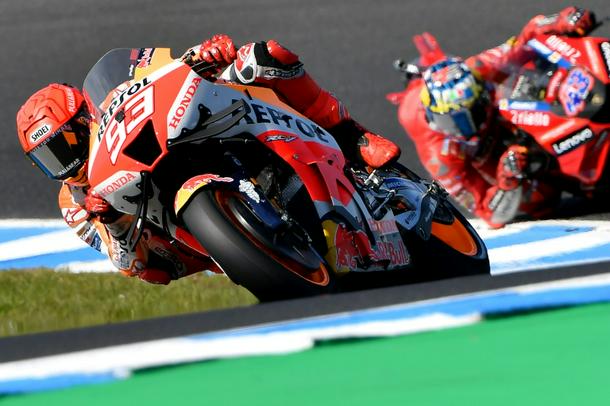 Marc Marquez is aiming for a fourth win in Australia

In dry and fine conditions, the Spanish Honda rider – a three-time winner in Australia – obliterated the pace set by France’s Johann Zarco on Friday with a sizzling one minute and 28.462 seconds.

World championship leader Fabio Quartararo of Yamaha barely squeezed into in Q2 qualifying in 10th after a frantic final lap.

The French Yamaha star was 0.396 seconds off the pace as he desperately searches for points this weekend after a string of poor results.

He holds a slender two-point lead in the standings over Italian Francesco Bagnaia – who finished eighth – with three grands prix left in the 20-race season.

Italy’s Luca Marini on a Ducati-VR46 was a surprise second quickest ahead of Spaniard Jorge Martin riding his Ducati-Pramac.

Just 40 points separate the top five, with all of them in the title race.