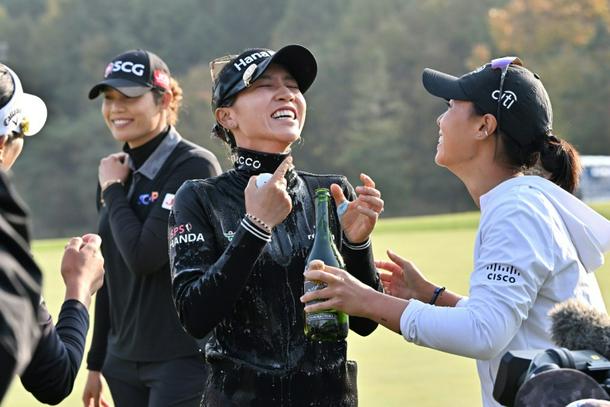 Wonju (South Korea) (AFP) - New Zealand’s Lydia Ko fired a 65 on Sunday to capture her 18th LPGA Tour title at the BMW Ladies Championship – and her first in South Korea, the country of her birth.

The 25-year-old’s seven-under par final round gave her a four-shot victory over American Andrea Lee at Oak Valley Country Club.

Ko carded eight birdies with just one bogey to capture the $300,000 winner’s cheque after finishing on 21-under 267.

“I feel so proud to be born in Korea,” Ko, whose family moved to New Zealand when she was four, told reporters.

“I think because of that, I really wanted to win here,” she said.

“This week my relatives are here, my direct family is here. And I wanted to win it for them as well.”

World number five Ko became the fifth LPGA player this season to have multiple victories, and it was the first time she had achieved the feat since 2016.

“This week, more than ever, I said I really, really want to win in Korea, and I think maybe that was a good mindset or I was hypnotising myself to try to get it done,” Ko said.

“Every time I come back to Korea, even though I play under the New Zealand flag, so many people support me and I think that is such a boost,” she added.

“It’s such an unreal setting and we don’t play in many atmospheres like that.”

Ko started the final round one shot behind the 54-hole leader, Thailand’s Atthaya Thitikul, at 14-under.

But Atthaya, ranked second in the world, stumbled to a round of 74 to finish sixth, missing out on her chance to overtake South Korean Ko Jin-young and become the new world number one.

The Thai would have jumped to the top of the world rankings with at least a fourth-placed finish.

South Korea’s Ko Jin-young, who was the defending champion, withdrew before the third round after shooting 80 and 79 on Thursday and Friday.

It was her first tournament after two months out with a wrist injury.

Sunday’s final round signalled the retirement of South Korean golfer Choi Na-yeon, who wrapped up her 15-year career with an emotional farewell.

Earlier this month, the 34-year-old announced that the BMW Ladies Championship would be her final LPGA tournament.

A tearful Choi made par on the par-five hole to card a four-under 68, her best round of the week, finishing two-under 286 for the tournament.

“I was fighting back tears from the beginning of the 18th hole,” said Choi.

“And that last putt, I couldn’t really see the ball because of my tears.”