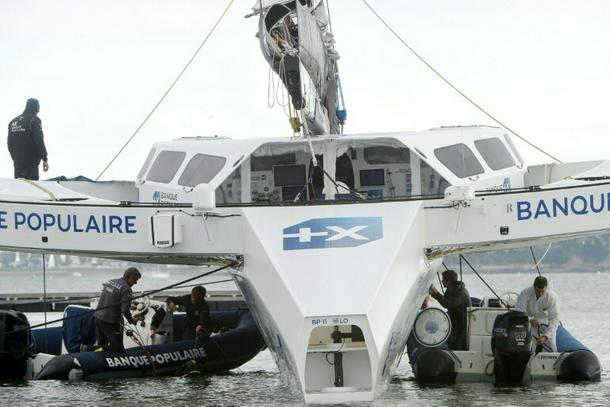 Rennes (France) (AFP) - Record-breaking French skipper Armel Le Cleac’h took to sea again in his repaired boat on Saturday even though his hopes of adding the Route du Rhum to his Vendee Globe triumph appeared in tatters.

Le Cleac’h had returned to Lorient in Brittany on Thursday to repair damage to Banque Populaire.

He set off again shortly before 1200GMT with the aim of finishing the Route du Rhum, a solo transatlantic race which ends in the Caribbean island of Guadeloupe, his team announced.

“We want to go to the end of the story,” Le Cleac’h said.

But on Saturday evening, competitors struggled in choppy seas with Thibaut Vauchel-Camus, who had been leading the race late Friday, capsizing while three others dismasted amid strong gusts of wind in the north Atlantic.

Frenchman Vauchel-Camus in Solidaires En Peloton-Arsep, who led the race on Friday evening in the Ocean Fifty category (15m trimarans), capsized in the Atlantic between Portugal and the Azores.

He was not injured and was sheltered in the central hull of his trimaran.

Louis Burton (Bureau Vallee), who was among the Imoca (18m monohulls) launched in pursuit of their leader Charlie Dalin (Apivia), dismasted in the late afternoon Saturday.

Then two skippers in Class40 also dismasted – Amélie Grassi (La Boulangère Bio) and Aurélien Ducroz (Crosscall), who were 10th and 11th place in the provisional classification.

The race is staged every four years and in 2018 Le Cleac’h capsized after two days.

This time around the winner of the 2016⁄2017 Vendee Globe round-the-world solo race had an issue with his daggerboard, a retractable fin attached to the keel.

It snapped after less than 24 hours at sea, on Thursday morning Le Cleac’h heard “a crack”.

“There was no warning. It broke in two seconds. It’s hard to believe,” he said on Friday evening.

“There is a lot of disappointment.”

His team had been working since Thursday to replace the daggerboard and to seal the damage to the hull.

“It ended badly four years ago, we lost a boat. This year, we want to finish this Route du Rhum,” Le Cleac’h said.