Jones vows England will 'go after' All Blacks

Twickenham (United Kingdom) (AFP) - England coach Eddie Jones insisted defeating New Zealand was far from a “mission impossible” as he promised his side would “go after” the All Blacks following a 52-13 win over Japan at Twickenham on Saturday.

Victory saw England revive their Autumn Nations campaign after a 30-29 loss to Argentina in their November opener last weekend, with the hosts running in six tries and a penalty try against Japan, like the Pumas one of their pool opponents at next year’s World Cup in France.

England have won just eight of their 42 Tests against New Zealand but did defeat the All Blacks when the teams last met, with Jones overseeing a 19-7 success in a 2019 World Cup semi-final in Yokohama.

That win meant England ended New Zealand’s eight-year reign as world champions, but Jones’s men then lost in the final to South Africa.

New Zealand face Scotland in Edinburgh on Sunday before heading south to play England at Twickenham on November 19.

“It’s an opportunity to play against one of the giants of world rugby,” Jones told reporters after the Japan match.

New Zealand lost to both Argentina and Australia in this year’s southern hemisphere Rugby Championship, with veteran former Wallabies and Japan boss Jones adding: “They are in a re-development period of their game. We will see them play against Scotland tomorrow (Sunday) and then have a chat about how we play against them.

“For an England player it’s a massive opportunity. You look at the history of the sport, the game has been going for, what, 150 years, and England has won 19 percent of Tests against New Zealand.

“So there’s a narrative about the game that says England can’t beat New Zealand. I think in the 2019 World Cup we showed if you’ve got the right attitude, the right game-plan then that history can be broken. So we’ve got a great opportunity this coming week to break history again.”

Jones said much had changed in the intervening three years but believes England’s survivors from that match would have an important role a week on Saturday.

“Certainly the guys who played in that game, guys like (England captain) Owen (Farrell), Mako (Vunipola), Billy (Vunipola), Jamie George and Maro (Itoje) are going to be important in reinforcing to the players that it’s not ‘Mission Impossible’, that if we go after them (New Zealand) they are there for the taking and we are going to go after them.”

Victory over Japan followed a lacklustre showing in what was just Argentina’s second win over England at Twickenham, with that result put into perspective by the Pumas’ 20-13 loss to Wales in Cardiff on Saturday.

“As I said in the round-up after Argentina, the fault that we didn’t play like that against Argentina was my poor coaching, so this week it is not my poor coaching. It’s a good play from the players.”

Japan presented Farrell with a Samurai sword after the match but there was no denying which team had the cutting edge where it mattered. 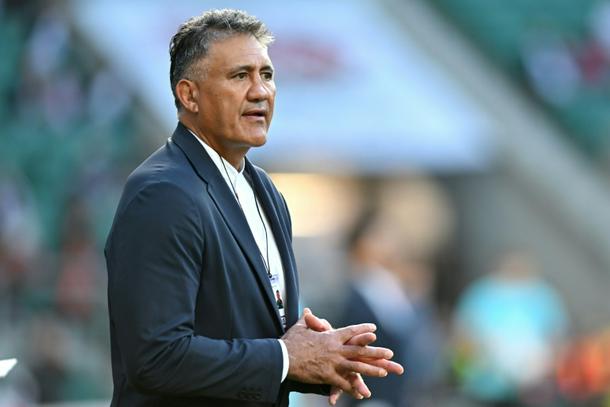 “England played really well and put us under a lot of pressure, especially at the start of the match,” said Japan coach Jamie Joseph, a former New Zealand flanker.

“You have to take your hat off to them.

“We became a little frantic and pushed a few passes.”

He added: “When we can create momentum we can be very dangerous but we didn’t do that in a Test that was a big game for our boys.”