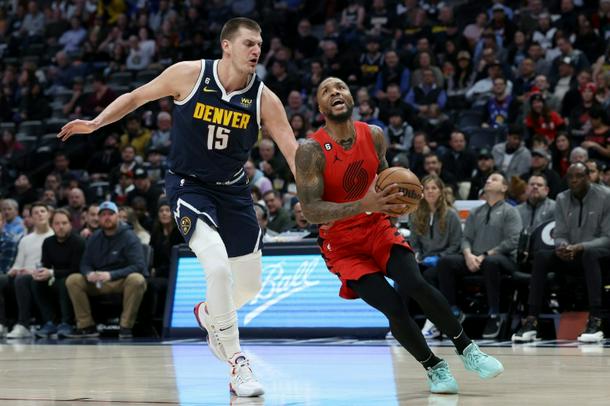 Los Angeles (AFP) - Nikola Jokic bagged his 13th triple-double of the season as the Denver Nuggets overcame a 44-point display from Damian Lillard to defeat the Portland Trail Blazers 122-113 on Tuesday.

Two-time NBA Most Valuable Player Jokic finished with 36 points, 12 rebounds and 10 assists as Denver extended their winning streak to seven games to move one game clear of Memphis at the top of the Western Conference.

It was the 17th 30-point triple-double of Jokic’s career, placing him in illustrious company alongside Magic Johnson and Larry Bird in seventh on the all-time rankings.

A high-scoring first half saw Denver take a 73-66 lead, with Lillard keeping Portland firmly in the hunt with 30 points in the opening two quarters.

But Denver’s defensive adjustments in the second half helped them take a firm grip on the contest as they stretched away in the fourth quarter – leading by as much as 20 points at one stage – to close out the win.

“But I think in the second half we played really good defense… and that’s why we won the game.”

Jokic’s 36-point haul came from 13-of-14 shooting from the field, including a near-perfect display from the free-throw line.

The Serb was one of five Denver players in double figures – Michael Porter Jr. added 23 points and Jamal Murray 17.

Bruce Brown had 12 off the bench while Aaron Gordon added 11.

Portland talisman Lillard meanwhile made six-of-12 from three-point range and was a perfect 14-of-14 from the foul line in his 44-point tally.

Elsewhere on Tuesday, a depleted Brooklyn Nets slumped to a third straight loss in a 106-98 defeat to the San Antonio Spurs.

The Nets were missing Kevin Durant (knee) and Kyrie Irving (calf) through injury, and the absentees proved critical as Spurs star Keldon Johnson bagged a career-high 36 points and 11 rebounds.

The victory snapped a five-game losing streak for San Antonio, who remain one place off the bottom of the Western Conference with 14 wins and 31 defeats.

Brooklyn have not won a game since Durant suffered his right knee injury against Miami on January 8.

While Brooklyn are struggling to rediscover their winning rhythm without Durant, Milwaukee once again shrugged off the loss of their star Giannis Antetokounmpo as they rolled to a 130-122 win over the Toronto Raptors.

Antetokounmpo has now missed four straight games for the Bucks, but Jrue Holiday stepped up with a big performance to guide the 2021 NBA champions to victory.

Holiday finished with a season-high 37 points, with six rebounds and seven assists, as second-placed Milwaukee edged closer to Boston at the top of the Eastern Conference.

“Definitely a team effort, everybody just played their hearts out and got the win,” Holiday said afterwards.

In Tuesday’s other game, Joel Embiid scored 41 points as the Philadelphia 76ers overpowered the Los Angeles Clippers 120-110 on the road.

The Sixers remain third in the Eastern Conference standings at 28-16.