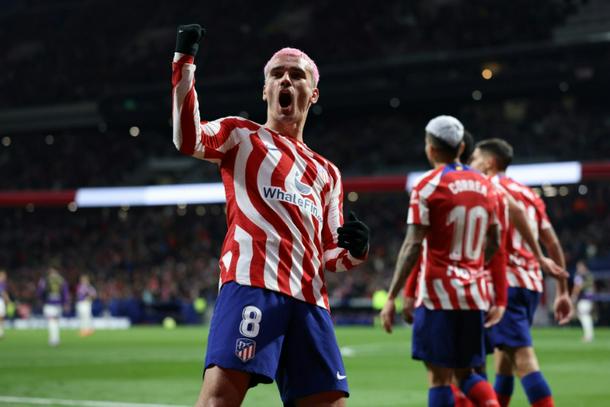 Madrid (AFP) - Atletico Madrid produced one of their best performances of the season to defeat Real Valladolid 3-0 on Saturday, with Memphis Depay making his debut.

Real Sociedad, third, continued their fine form with a 2-0 win at Rayo Vallecano, while struggling Sevilla snatched a 1-0 win over Cadiz with a late Ivan Rakitic penalty.

Atletico’s new Dutch forward Depay, signed from Barcelona on Friday, came off the bench in the second half but by then Antoine Griezmann’s virtuoso display had the hosts in full control at the Metropolitano.

The French forward produced a sublime assist for Alvaro Morata to open the scoring and then struck the second himself.

Mario Hermoso netted the third from the rebound after his header from Griezmann’s free-kick was parried back into his path.

Those three goals in an 11-minute spell in the first half wrapped up the points for fourth-placed Atletico.

Diego Simeone’s team have endured a tough season both in the league and also in Europe, where they were eliminated, but earned a second win in seven league games to get heading back in the right direction.

On Thursday they face rivals Real Madrid in the Copa del Rey quarter-finals, important both as a derby but also their last realistic chance of silverware this season.

“We have been doing well since the World Cup, playing with intensity, hard work, having chances up front, but we lacked a goal.

“That was largely my fault, because I was having chances but couldn’t get it in. This goal will help me a lot mentally to get scoring again.”

Griezmann’s stunning back-flick played in Morata, who cut inside and drilled home at the near post.

The victory brings Atletico within 10 points of leaders Barcelona, albeit having played two extra games. 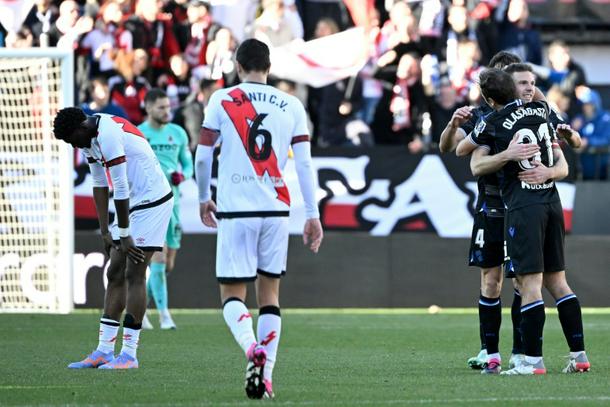 The visitors opened the scoring at Vallecas after 15 minutes when veteran playmaker David Silva set up Norwegian striker Alexander Sorloth, who prodded home.

The striker now has five goals in his last five league games for the club.

Ander Barrenetxea doubled the Basque side’s lead in the 36th minute flying in to convert a flicked-on corner.

It was the 21-year-old forward’s first start since a severe hamstring injury in January 2022.

“This won’t lead us to make the mistake of loosening up, there’s a long way to go, we’re not even at the half-way point yet,” said coach Imanol Alguacil.

“For now it’s true that we’ve had a great start but we have to keep that going, otherwise it’s not worth anything.”

Sevilla climbed out of the relegation zone with a tight win over 19th place Cadiz at the Ramon Sanchez-Pizjuan.

Their coach Jorge Sampaoli was sent off for dissent in the second half with the game goalless.

Sevilla had chances but could not convert them, until Rakitic slotted home from the penalty spot with two minutes to go.

Cadiz defender Ivan Alejo conceded the spot kick and was sent off when he handled a cross falling into the path of Lucas Ocampos, who returned from a loan at Ajax earlier this week.

Thousands of Sevilla fans protested outside the stadium against the running of the club before the match, although moving a point clear of the drop zone will brighten the mood a little.

Earlier Espanyol earned a 1-0 win over Real Betis thanks to Martin Braithwaite’s strike.