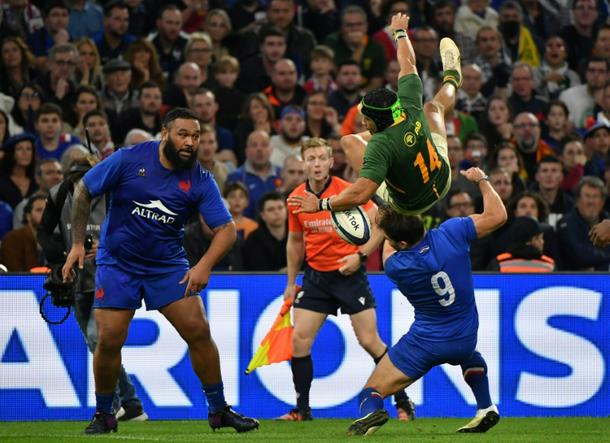 The Springboks’ 2019 World Rugby Player of the year Pieter-Steph du Toit was sent off inside the first quarter of an hour before last year’s award winner and captain Antoine Dupont suffered the same fate after the break for the home side.

Les Bleus, next year’s Rugby World Cup hosts, laid down a marker with a win over the Webb Ellis trophy holders less than ten months out from the tournament.

After the smoke from the pre-match show lifted, Springboks captain Siya Kolisi came out of the tunnel sprinting in front of the 65,000 full house, reminiscent of when he became the first black player to lead his country in June 2018.

Thomas Ramos kicked a penalty to make it 3-0 to the hosts before du Toit’s moment of madness after just 12 minutes as he headbutted Jonathan Danty at a ruck.

Galthie was forced to re-shuffle his back-line with Danty off for a head injury assessment as flanker Sekou Macalou came onto the wing and Yoram Moefana moved to centre.

Galthie’s outfit took the ascendancy and Ramos added a second penalty to make it 6-0 after 17 minutes before Cyril Baille crashed over just after the quarter mark.

Ramos slotted the extras to make it 13-0 with the Webb Ellis trophy holders stunned.

Winger Cheslin Kolbe scored a penalty to make it 13-3 after 25 minutes to calm the away side’s nerves.

Kolisi’s pre-game passion lifted to another level on the half-hour mark as he spun away from a rolling maul to slide over, then celebrated by pointing to the sky, before Kolbe kicked the additional points to make it 13-10.

With things finely balanced and the Boks calmed after du Toit’s red card, Ramos was successful with a third penalty which made it 16-10 at the break.

Kolbe and Ramos traded penalties after the interval as France led 19-13 with 35 minutes remaining.

Dupont then followed Du Toit as he took out Kolbe in the air from a Faf de Klerk kick with the Boks camped inside Les Bleus’ 22m.

After a second lineout Willie le Roux found Kurt-Lee Arendse with a sublime pass before scrum-half de Klerk slotted the touchline conversion to make it 20-19 with less than half an hour to play.

Dupont’s opposite number De Klerk, having taken over the kicking duties from Kolbe, off for a head injury assessment, and Ramos exchanged shots at goal to leave the score at 23-22 to set up a tense final quarter.

De Klerk was subbed off before Damian Willemse made it 26-22 with a penalty.

After three pick and gos on the South Africa line, replacement prop Sipili Falatea buried over, two phases after his nephew Yoram Moefana had broken the defensive line.

Barnes’ checked the try with his video referee before Ramos missed the conversion leaving the score 27-26 with four minutes to go.

France’s 12th straight victory was sealed with less than two minutes on the clock as Ramos kicked a penalty from 45m to stake their claim for next year’s World Cup.