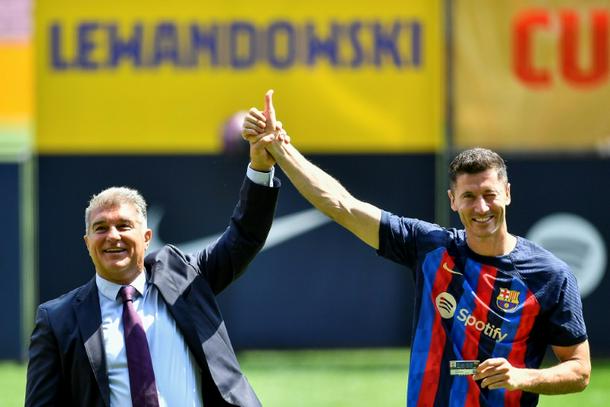 Barcelona (AFP) - By the time Barcelona kick off against Bayern Munich on Wednesday at the Camp Nou, they may already be eliminated from the Champions League.

Xavi Hernandez’s side have just one win from their first four matches in Group C, with a 3-3 draw at home against Inter Milan earlier in October likely sealing their fate.

Should the Italian side beat already-eliminated Viktoria Plzen earlier on Wednesday at the San Siro, then Barcelona will be out.

For a club which spent lavishly in the summer on players including Robert Lewandowski, Jules Kounde and Raphinha, in sporting terms, the elimination is embarrassing.

Financially, it puts more strain on the club’s accounts which stood at 1.3 billion euros ($1.28 billion) in debt in the summer, thanks to overspending and the Covid-19 pandemic, before president Joan Laporta and the board pulled their infamous “palancas” – financial leverage.

They sold 25 percent of their La Liga television rights for the next 25 years to American investment firm Sixth Street Partners across two deals, for a combined total of an estimated 665 million euros.

The club had accounted for reaching the Champions League quarter-finals, so a second consecutive group-stage elimination will cost them an estimated 20 million euros in prize money, not counting revenue from ticket sales or television rights.

On the other hand, they will earn some income from a potential Europa League run, albeit significantly less than in the Champions League. They will also save some money by not having to pay player bonuses tied to Champions League progress.

“If they go out of the Champions League, they will lose income but also stop paying bonuses, thus, saving money. (Their situation) won’t vary much this season,” said La Liga president Javier Tebas on Friday.

La Liga’s own financial fair play spending rules prevent clubs from overspending on transfer fees and salaries, based on their debt levels and income. Barcelona previously could only spend a quarter of any money they earned as a result.

Harnessing their financial leverage this summer helped them get past the rule and revamp the squad, but next summer problems beckon unless they can reduce their overblown wage bill.

“The palancas worked for this year, they said it themselves, but for next season they can’t do it again, they have to reduce their salary,” added Tebas.

“They can’t continue with 500 million euros of salary to pay, they have to reduce it to 400 or a little more, like Real Madrid and other big European clubs. If not, next year they will be back on the 1:4 spending ratio.”

Sergio Busquets’ contract expires in the summer but some of the squad’s other highly-paid players, including Gerard Pique and Jordi Alba have longer to run on their deals.

Champions League elimination certainly won’t help Barcelona’s financial situation, but a more worrying issue is that overblown salaries handed out by the previous Josep Maria Bartomeu regime are still weighing the club down.

After failing to reach agreements with some players over a pay reduction in the summer, Laporta and club treasurer Ferran Olive put forward a guarantee of around 11 million euros of their own money, to ensure Kounde was registered.

Regardless of whether they are eliminated or there is an unlikely Champions League “miracle”, unless Barcelona can reduce their wage bill in the months to come, next summer they will have to be significantly thriftier.