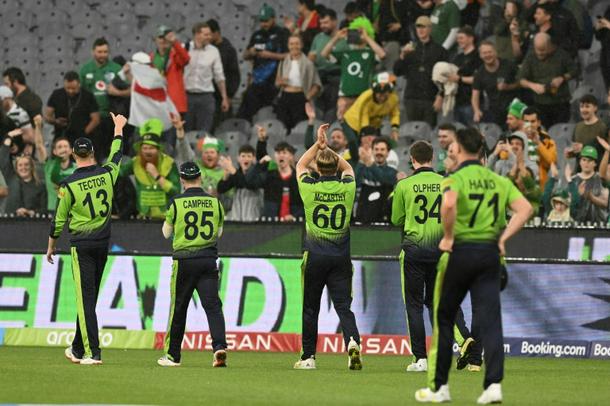 After being sent in to bat, Ireland captain Andy Balbirnie smashed 62 from 47 balls as he led his team to 92-1 off 10 overs before a collapse saw them all out for 157 with four balls remaining

England’s batting line-up struggled to get any momentum, slumping to 29-3 with just one boundary in the first five overs as the Irish bowlers found pace and movement.

Eighteen minutes were lost to rain at the beginning of the game and the players were taken off again, this time for good, with England on 105-5 off 14.3 overs just as Moeen Ali was getting into his stride with 24 off 12 balls.

England were five runs behind on the DLS scoring method, handing Ireland a famous victory.

“Our message was to just create chances and we know how this England team like to play, if we take every chance then we would be in with a shot.

“This will do a lot to grow the game back home.”

It was Ireland’s second massive upset of the tournament after they beat West Indies in the first round to send the two-time champions home.

England were among the title favourites and heavily-fancied to beat Ireland after opening their tournament with a five-wicket win over Afghanistan at the weekend.

Instead the shock defeat has thrown Group 1 wide open with Australia, Sri Lanka, Ireland and England all now with one win and one defeat. New Zealand also have one win and play Afghanistan in their second match later Wednesday.

“We were not consistent enough, let them score on both sides,” said England captain Jos Buttler.

“There were some favourable conditions for bowling, we had everything in our favour, winning the toss and electing to field knowing the weather. We didn’t take advantage of that.

“They outplayed us in all three facets of the game and the better team won. We know we have made a mistake here and have put more pressure on us.”

Morning drizzle cleared for the toss at an eerily quiet MCG compared to the electric atmosphere when 90,000 packed the venue on Sunday for India’s incredible last-ball win over Pakistan.

Buttler sent Ireland in and Mark Wood, bowling at 154kph (96mph), accounted for dangerous opener Paul Stirling, caught for 14 by Sam Curran at the ropes.

Balbirnie was hit on the finger but the Irish captain soldiered to build an 82-run partnership with Lorcan Tucker.

It ended when Tucker was run out for 34 with the score on 103 to spark a collapse.

Harry Tector was caught behind by Buttler off Wood two balls later. Balbirnie reached his eighth T20 half-century before holing out to Alex Hales off Liam Livingstone.

A yorker from Livingstone removed George Dockrell the next delivery and Wood grabbed his third by having Curtis Campher (17) caught behind.

Livingstone matched Wood’s three-wicket haul when Mark Adair was caught in the deep. 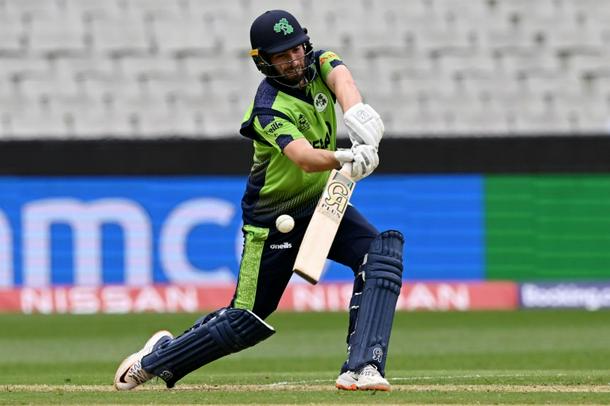 England had a horror start with Buttler out second ball to Josh Little, edging to wicketkeeper Tucker, and the out-of-form Hales followed him in the third over with Little again doing the damage.

Ben Stokes, so often the hero, only lasted eight balls, bowled by Fionn Hand, to leave England in deep trouble.

They crawled to 64-3 after 10 overs. Harry Brook (18) became another victim an over later, pulling George Dockrell to Gareth Delay at midwicket.

Dawid Malan was dropped twice in two balls on 23 but finally fell for a scratchy 35 before Ali’s rescue attempt was ended by the rain.