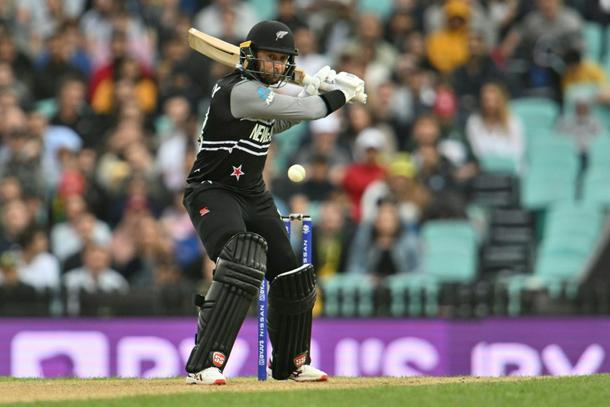 Sydney (AFP) - Opener Devon Conway carried his bat with a majestic unbeaten 92 as New Zealand set an imposing 200-3 against Australia in the opening Super 12 game at the Twenty20 World Cup on Saturday in Sydney.

Conway’s knock came from 58 balls with seven fours and two sixes, joining a select group to make 90 or more at a World Cup.

Hosts Australia are defending champions with the sold-out Sydney Cricket Ground clash a repeat of the 2021 final in Dubai that Australia won by eight-wickets.

But they got off to a sensational start on an overcast evening after Australian skipper Aaron Finch sent them in to bat, with Finn Allen cracking two fours and a six off Mitchell Starc’s opening over.

Not to be outdone, opening partner Conway then crunched two blistering boundaries off Josh Hazlewood as the Black Caps plundered 29 from the first two overs.

Adam Zampa dropped Allen in the next over as Pat Cummins was similarly punished, taken for 17.

But the young right-hander’s luck ran out when Hazlewood returned and the wily pace spearhead bowled him for 42 – off just 16 balls – as he charged down the crease.

The introduction of Marcus Stoinis and spinner Zampa helped stem the run flow, but New Zealand still reached 97-1 at the halfway mark.

An impressive Conway brought up his 50 with a six off Zampa before the spinner trapped Kane Williamson (23) lbw in the same over.

Hazlewood caught and bowled Glenn Phillips for 12 before Jimmy Neesham hit a six off the final ball of the innings to reach 200.