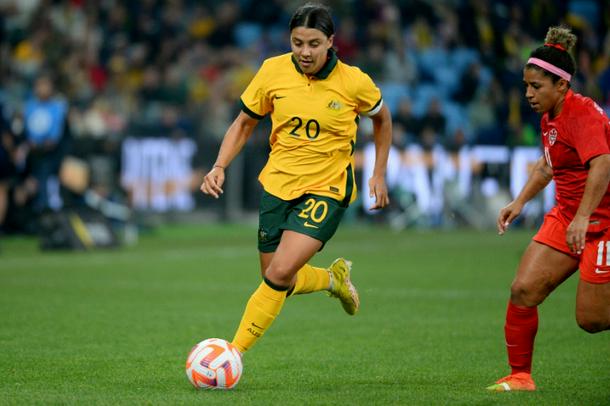 Sam Kerr has more than 100 appearances for Australia

Paris (AFP) - Australia’s Sam Kerr kept Chelsea top of Group A in the women’s Champions League on Wednesday with four goals in an 8-0 thrashing of Albanians Vllaznia, as Real Madrid held Paris-Saint Germain to a draw.

Chelsea backed up an excellent victory over PSG in their opening group game six days ago.

The 29-year-old Kerr broke the deadlock after 10 minutes thanks to Pernille Harder’s assist.

Kerr then had her double on 37 minutes, benefitting from winger Guro Reiten’s deflected cross.

Reiten was also the provider for the Blues’ third as she found Denmark’s Harder two minutes later.

Kerr’s third and fourth followed just before the hour and Harder then added her second and replacement Katerina Svitkova got on the scoresheet with 12 minutes remaining.

Harder completed the rout and claimed her hat-trick with two minutes left to put Chelsea two points clear of Real.

Hamraoui has been absent since she suffered an attack in November 2021 and was suspended after an altercation with a team-mate during training.

Her fellow PSG player Aminata Diallo was suspected along with five men of being behind last year’s attack.

Hamraoui came off the bench on 76 minutes but was unable to help the capital club find their first win of the campaign.

In Group B, two-time former winners Wolfsburg beat Slavia Prague 2-0 and Manuela Giugliano scored a goal and set up another as Roma edged Sankt Poelten 4-3 in western Austria.