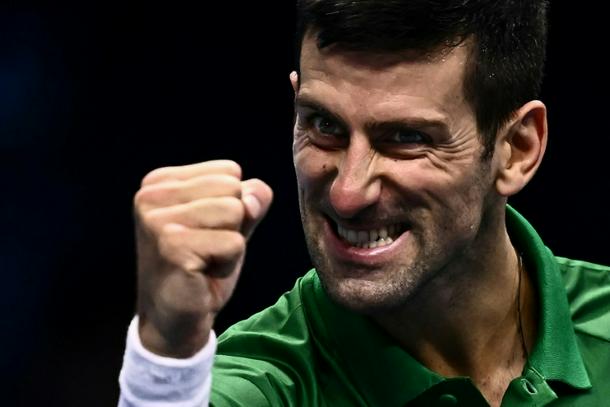 On his way: Novak Djokovic celebrates victory over Andrey Rublev to secure a last-four berth at the ATP Finals and then said he was happy he would be allowed to play in the Australian Open

Turin (Italy) (AFP) - Novak Djokovic confirmed Wednesday he has received a visa to travel to Melbourne to play in the 2023 Australian Open after missing this year’s tournament when he was deported over his vaccine status.

“I was very happy to receive the news yesterday. It was a relief,” the Serbian said after beating Andrey Rublev in the ATP Finals in Turin.

“It was a relief obviously knowing what I and people closest to me in my life have been through this year with what happened in Australia and post-Australia obviously. I could not receive better news for sure, during this tournament as well.”

On Tuesday, Australian media reported that the government had decided to grant the unvaccinated Serbian a visa, overturning a three-year ban after his ejection from the country.

This year’s championship was overshadowed by nine-time Australian Open champion Djokovic being put on a plane on the eve of the contest after a high-stakes legal battle over his visa status.

“Australian Open has been my most successful Grand Slam.” said Djokovic. “I made some of the best memories there.”

Djokovic was speaking after securing a spot in the last four of the season-ending Finals with a 6-4, 6-1 win over Rublev, his second straight sets victory in as many matches.

He said the news from Australia had been a boost.

“Did it affect my game today? I would like to believe it did.” he said.

“Knowing that I have clarity now, what I do in the off-season, starting the season in Australia, also of course did relieve some of the pressure.”

He shattered Rublev’s resistance in just a few games after taking the only break point either player had in the first set at 4-4.

Djokovic served out the set and then exploited Rublev’s frustration to break again early in the second as he went 3-0 ahead and cruised to victory.

“One of the best matches I played this year, particularly in the second set. Just a flawless set really.”

Having beaten Stefanos Tsitsipas in his first Red Group match on Monday, the Serb is guaranteed a spot in the last four regardless of his result on Friday against Daniil Medvedev.

“I’m really glad to be through to the semis,” he said. “At the same time, I want to win that match, win every match that I play here.”

Djokovic is ranked just eighth in the world in part because he missed tournaments, including the Australian Open and US Open, over his vaccination status.

“The upside of not playing many tournaments is that you’re going to be fresher than when you’re playing a lot more,” he said. “I had more time to train, to practice.”

“Sometimes I do wish, in the pro men’s tennis season, we have a bit more time to really have those training blocks to be a bit longer, so you can really work on your game and your body.”

“I’m also at the position I think now in my career where I’m able to choose which tournaments I play and where I want to peak, at what time of the season.”

“Obviously I missed a lot of big tournaments,” he said. “But I can say I learned a lot this year about myself, about the world that I live in, and about some people as well who have behaved in a certain way to me in this whole process.

The Greek player who was champion in 2019 will now play for a place in the semi finals on Friday against Andrey Rublev.

Medvedev served for the match at 5-4 in the third set but blew his chance and then wilted to 7-1 in the eventual tie break.