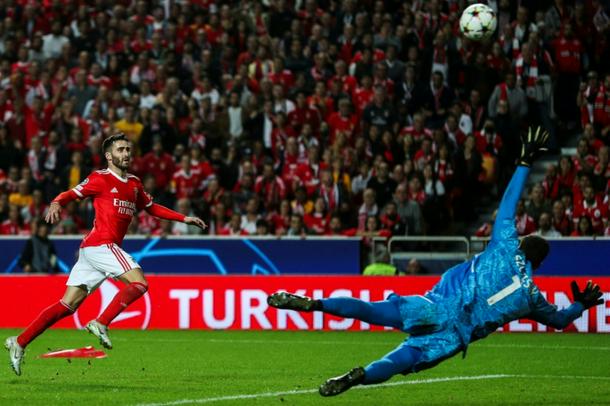 Lisbon (AFP) - Benfica reached the Champions League knockouts on Tuesday after winning an exciting contest with Juventus 4-3 and sending the Italians out of the competition.

Roger Schmidt’s side are unbeaten in all competitions this season and can beat their group-stage points record of 12 with a win at bottom side Maccabi Haifa next week.

Benfica are level on 11 points with leaders Paris Saint-Germain and have a chance to top the group next week, although they would need Juve to get a result against the French champions in Turin after being dumped out at the group stage for the first time in nine years.

Juve travelled to Lisbon knowing that only a win would give them any hope of making it through to the last 16, but although Moise Kean had them level in the 21st minute the away side never had the chance to claim the three points.

Another bad night for Juve was somewhat alleviated by the fight shown late on, with quickfire Arkadiusz Milik and Weston McKennie goals and a big push for the win in the final 15 minutes turning what looked like being a thumping into merely a painful elimination.

The result will still put more pressure on under-fire coach Massimiliano Allegri on a day in which prosecutors in Italy closed preliminary investigations into alleged false accounting by Juve.

His team have lost four of their five matches in the competition and are not even guaranteed of dropping down to the Europa League as they are level on just three points with Maccabi.