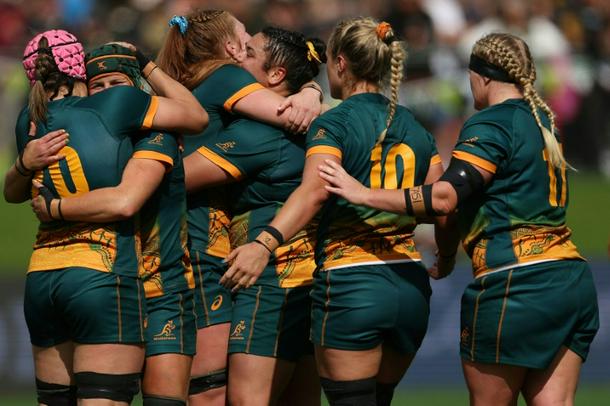 Whangarei (New Zealand) (AFP) - Australia qualified for the women’s Rugby World Cup knockout stage for the first time in 12 years after beating Wales 13-7 in a tense clash in Whangarei on Saturday.

Both teams scored one try apiece but two penalties from fullback Lori Cramer proved decisive as the Wallaroos guaranteed themselves a second-placed finish in their group behind hosts New Zealand.

Wales picked up a bonus point because of the close margin, leaving them with a chance of qualifying for the last eight as one of the best third-placed pool finishers.

Predictions the match between the teams ranked seventh and eighth in the world would be tight proved accurate.

Both had registered a narrow win over Scotland and heavy loss to New Zealand and they couldn’t be split as they neared halftime with the scores locked 7-7.

Cramer’s penalties were landed near the end of each half to ensure Australia will advance through the group stage for just the second time, having reached the semi-finals of the 2010 tournament in England.

The result was a reward for their dominance of possession and territory, with Wales forced into attempting 276 tackles.

“To be fair we had some good defensive stats there and the girls showed heart,” Welsh captain Hannah Jones said.

“Just disappointed with the result. We’ll pick heads up and hope we can go again.”

The Welsh defence was cracked only once, when Australian halfback Iliseva Batibasaga darted through a gap in the fifth minute.

Wales’s response was a close-range try to No.8 Sioned Harries, the 28th of her Test career.

However, they barely threatened the tryline again, even when a 70th-minute yellow card to replacement forward Kaitlan Leaney reduced Australia to 14 players.