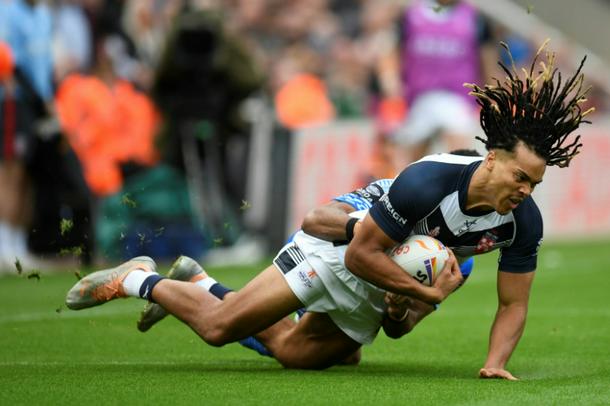 The Kangaroos, who have won seven of the last eight Rugby League World Cups, including the last edition in 2017, outscored their rivals by seven tries to two at Headingley in Leeds.

“There are a few things to fix up with the ball but all in it was a good effort. Everything we asked of our players they executed well.”

Fiji made a strong start to the game, Semi Valemei latching on to a grubber for a shock opening score.

The Kangaroos, in their first international since a loss to Tonga in November 2019, hit back through Jeremiah Nanai, who stepped through the defence to go in under the posts.

Addo-Carr then showed the Fijian defence a clean pair of heels as he streaked away for a swerving 95-metre try.

Angus Crichton bundled over and Australia were suddenly 18-4 up.

The defending champions, particularly strong at the crucial play-the-ball phase, proved adept at running through their sets, draining the Fijian defence.

Another powerplay up the middle by man-of-the-match Cameron Munster saw him exchange passes with Addo-Carr down his left wing before fending off the final defender and offloading to Latrell Mitchell for Australia’s fourth try.

Harry Grant then darted over from dummy half, with the South Sea Islanders firmly on the back foot.

Skipper James Tedesco, who played for Italy in the last two World Cups, got his name on the scoresheet, jinking through before Addo-Carr latched on to a dink to touch down for his second try. Valentine Holmes converted all seven tries.

Fiji didn’t roll over, however, Sunia Turuva crossing for his team’s second try with five minutes to play.

Dom Young had earlier scored two superb tries to help England to a 60-6 thrashing of Samoa in the opening game of the tournament, which runs until November 19, in Newcastle.

England had gone into the match at St James’ Park as underdogs against a Samoan team boasting six members of Penrith Panthers’ recent NRL Grand Final-winning team as well as two from the runners-up Parramatta Eels.

But Samoa were never in it, England running in 10 tries in total, seven in a dominant second half.

After a cagey start, England took the game by the scruff of the neck with three quick-fire first-half tries by Jack Welsby and Roosters winger Young (2).

It was quite the statement by the tournament hosts, for whom loose forward Victor Radley was outstanding, with favourites Australia kicking off the defence of their title at Leeds against Fiji later on Saturday.

England coach Shaun Wane admitted he had “never expected that sort of scoreline”.

“Samoa were a bit off today but our defence put them off,” Wane told BBC. “There was a spell in the first half where we were off. But apart from that we were brilliant.

“I just wanted to win the game and we did it in such a good manner.”

Wane’s Samoan counterpart Matt Parish added: “England had momentum and we couldn’t swing it back.

“We always knew we were a bit underdone but didn’t expect a result like that.”

Half-backs George Williams and Welsby dominated the early skirmishes as Samoa struggled for any fluidity in front of 43,199 fans at the Premier League ground of Newcastle United.

Izack Tago pounced for a smart intercept of a Welsby pass, the centre sprinting in from 60 metres for Samoa’s sole try, Stephen Crichton converting.

Tyrone May was stretchered off early in the second period after a tackle by Kallum Watkins, the England centre stepping through for a try minutes later after Williams spotted Samoa short on numbers.

With Samoa down a man, England made the most of their numerical superiority as Herbie Farnworth and Elliott Whitehead (2) then crossed for tries.

Williams and Tom Burgess also scored late tries, along with the sharp-shooting Tommy Makinson, whose final conversion left him with a personal tally of 20 points.