US hits network that smuggled chips to Russian arms makers 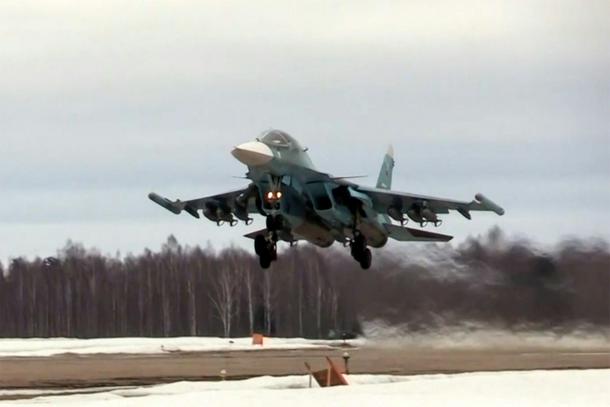 The US unveiled charges against a trading ring that supplied US-made parts to Russian arms makers, including to be used in the Sukhoi Su-34 fighter-bomber

Washington (AFP) - US authorities indicted five Russians Wednesday who allegedly shipped American electronic components to Russia arms makers, some of which have been found on the battlefield in Ukraine.

Separately, three Latvians and a Ukrainian were charged for attempting to send a US-made high-precision industrial grinder to Russia that the Justice Department said could be used by arms makers or in a nuclear weapons program.

The Justice Department said the two schemes involved front companies in multiple countries including Dubai and Germany and were designed to evade US and global sanctions on Russia.

The first scheme involved buying sensitive technologies from US manufacturers like advanced semiconductors and microprocessors that are used in fighter aircraft, missile systems, smart munitions, radar and satellites.

The Justice Department said Dubai-based Russian Yury Orekhov, Artem Uss, the son of a regional Russian governor, and the three others used a Hamburg, Germany-based firm for the operation, shipping some of the technology to Russian defense companies that are under US sanctions.

It said, for example, that Orekhov had travelled to the United States in 2019 to source parts that were used in the Russian-made Sukhoi fighter aircraft.

“Some of the types of electronic components obtained through the criminal scheme have been found in Russian weapons platforms seized on the battlefield in Ukraine,” the Justice Department said.

At the same time, it said, Orekhov, his Russian parters and two Venezuelan oil brokers who were also indicted, used the German company as a front to ship “hundreds of millions of barrels of oil” from Venezuela to Russia and China, violating global sanctions.

Payments meanwhile were routed through shell companies, a bank in the Untied Arab Emirates, and via cash drops and cryptocurrency trades, the department said.

The five Russians and two traders are charged with conspiracy to defraud the Untied States, sanctions violations, fraud and money laundering.

Orekhov and Uss were arrested Monday in Germany and Italy, respectively, and the United States will seek their extradition, the department said.

In the second scheme, the four arranged the purchase of a jig grinder made in the US state of Connecticut ostensibly for the European market, but sought to ship it to Russia. The grinder was intercepted by Latvian authorities.

“These defendants attempted to smuggle a high-precision export-controlled item to Russia where it could have been used in nuclear proliferation and Russian defense programs,” said US Attorney Vanessa Roberts Avery.

The three Latvians were arrested on Tuesday while the Ukrainian national was arrested in June in Estonia.

They are all charged with conspiracy to defraud the Untied States, smuggling, and money laundering. The Justice Department is also seeking their extradition.

Meanwhile the US Treasury placed sanctions on Orekhov, the German company and a Dubai company he controls.

“Russia has increasingly struggled to secure critical inputs and technologies needed for its brutal war against Ukraine,” said Deputy Treasury Secretary of Wally Adeyemo in a statement.

“We know these efforts are having a direct effect on the battlefield, as Russia’s desperation has led them to turn to inferior suppliers and outdated equipment,” Adeyemo said.