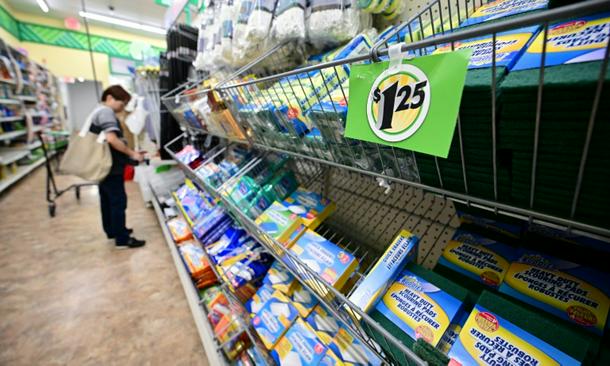 The data was seen as solidifying expectations of further interest rate hikes, and helped push the dollar higher. The greenback hit its highest level against the Japanese yen since 1990.

US consumer prices rose 0.4 percent in September compared to August, twice the 0.2 percent projected by analysts even as the annual increase in the consumer price index slowed slightly to 8.2 percent from 8.3 percent.

But core inflation, excluding volatile energy and food prices, climbed to 6.6 percent from 6.3 percent in August.

The US Federal Reserve has raised interest rates at an aggressive clip of 0.75 percentage points at its last three meetings. It has signalled plans to continue doing so until rampant inflation is brought under control.

That has led to a slump in stock prices in recent months, as higher interest rates will reduce consumer spending power.

Last month saw a brief rally in stocks after data suggested the US economy was slowing. Investors hoped that it would allow a “pivot” by the Fed to a slower rate of interest rate hikes.

“The strong CPI only reinforces the view that there is no way the Federal Reserve can contemplate a ‘pivot’ this year,” said Stephen Innes at SPI Asset Management.

But by late morning, Wall Street’s main indices were all solidly higher.

“In the aftermath of the hotter US CPI report, we saw risk assets tumble as the dollar and bonds jumped,” said market analyst Fawad Razaqzada at City Index and FOREX.com.

“Much – or in some cases, all – of those moves have since been undone due to profit-taking, while banks and energy stocks rose thanks to even higher yields and rebounding crude oil prices,” he added.

The FTSE 100 in London added 0.4 percent amid media speculation the government may cut back on its fiscal stimulus plans and increase corporate taxes in its latest policy U-turn.

The speculation sent the pound soaring 1.9 percent against the dollar.

The ten-year yield on Wednesday struck 4.64 percent, the highest since the 2008 global financial crisis and higher than the level that prompted the BoE’s recent bond market intervention.

The drop in UK bond yields helped fuel a rebound in stocks of home builders and mortgage lenders.

The dollar rose as high as 147.67 yen, its highest level since 1990, as US and Japanese monetary policy increasingly diverge.

The Bank of Japan has so far refused to raise interest rates, making yen investments less attractive than dollar investments.

“The Bank of Japan continues to keep monetary policy easy because inflation and wages remain relatively low” in Japan, said Carol Kong, and economist and currency strategist at Commonwealth Bank of Australia.