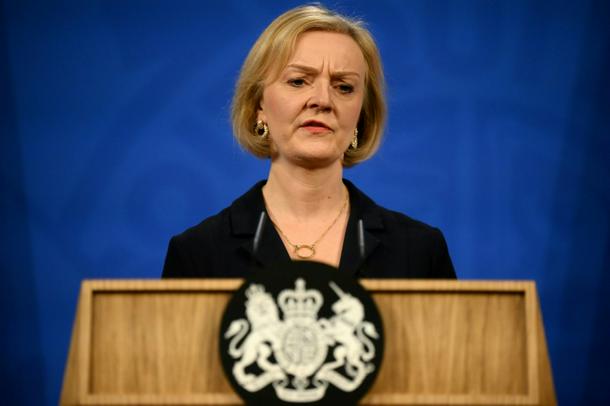 New York (AFP) - The pound fell on Friday after under-fire British Prime Minister Liz Truss sacked her finance minister and made a dramatic policy U-turn, while an equity rally ran out of steam.

The September 23 budget sent the pound tumbling to a record dollar low, near parity with the greenback, and bond yields surged before stabilizing thanks to interventions by the Bank of England.

Sterling sank more than one percent to under $1.12 after Truss dismissed Kwarteng.

It fell even lower after Truss appointed Jeremy Hunt as her new finance minister and announced a dramatic policy U-turn, before clawing back some of its losses.

In her first Downing Street press conference, Truss stated the “need to act now to reassure the markets,” abandoned her plans to eliminate an increase in corporation tax and said spending would not increase as rapidly as planned.

UK 10-year government bond yields rose after the Bank of England publicly stated it would end its costly market interventions on Friday.

“Unfortunately for Truss, her swift ability to spook markets with a swathe of unfunded spending plans is now being followed by yet another rise in yields, as markets wonder whether we could soon see another push to replace her,” said Joshua Mahony, senior market analyst at online trading platform IG.

London’s FTSE 100 ended the day with an increase of 0.1 percent, having given up most of its earlier gains because Truss’s U-turn left her position fragile.

Berenberg bank Senior Economist Kallum Pickering said “the policy U-turn is a major humiliation for Truss” and weakens her politically.

“It is not easy to see how Truss – whose personal mandate is now in tatters – can continue as PM for long,” he added.

While European markets ended higher, Wall Street failed to hold onto gains made on Thursday in a surprising rally despite data showing strong inflationary pressures in the United States.

After rising early on, US stocks resumed their downward spiral, with the S&P 500 losing 2.4 percent.

US retail sales in September were virtually unchanged from August at $684 billion, Commerce Department data showed in a report that revealed the drag on consumers from inflation.

Meanwhile, consumer sentiment data from the University of Michigan came in slightly better than expected, but the report cautioned of a “bumpy road ahead for consumers” due to uncertainty over inflation and the state of financial markets.

Third quarter earnings season got into full swing, with a number of large banks, including JPMorgan Chase and Citigroup, reporting lower earnings and setting aside more funds in preparation for a possible recession, although their performances topped analyst estimates.