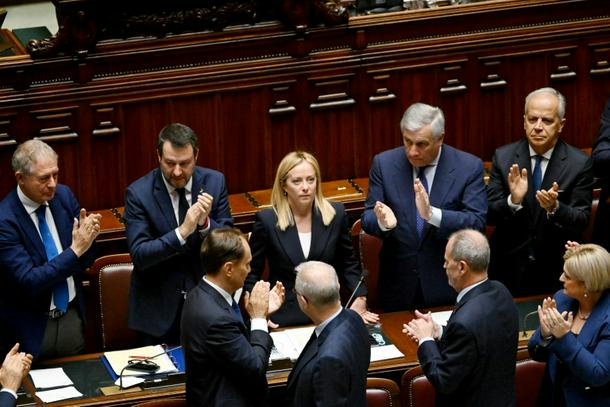 The floating storage and regasification unit will be set up in the port of Piombino in Tuscany, Commissioner Eugenio Giani told a press conference in Florence, despite opposition from environmental activists and locals.

The Golar Tundra, owned by Italian gas group Snam, is expected to be operational by the end of March and will allow gas to be easily transported to the country’s heavily industrialised north.

The project was a key part of former prime minister Mario Draghi’s plan to reduce Italy’s reliance on Russian gas following the invasion of Ukraine.

His energy minister Roberto Cingolani, who is staying on in an advisory role to help Meloni, said earlier this month that the Piombino terminal is “essential to national security”.

This was echoed by the head of Italian energy giant Eni, Claudio Descalzi, who said Italy “absolutely needs” the unit to stave off a crisis in 2023, which is set to be “a much more complex year”.

The terminal will mean “lower energy bills for 60 million Italians” as well as “the ability to… have gas more easily without depending on Russia,” Commissioner Giani said Tuesday.

But unions, local citizens and even Piombino’s mayor have said it will pose health and safety risks for locals and tourists who travel between the port city and the island of Elba, a popular holiday destination.

And environmental associations have warned the terminal, which will receive LNG and transforms it back into natural gas, will slow down Italy’s transition to renewable energy.

Greenpeace Italy has slammed the project as based on “incomplete assessments, superficial considerations and unfeasible timelines”.

Simone Tagliapietra, adjunct professor of energy, climate and environmental policy at the Johns Hopkins University - SAIS Europe, told AFP that regasification units “do not have a particular environmental impact”, nor would this one constitute “an eyesore”.

The Piombino unit is not only “fundamental for Italy” but also an energy source “diversification that benefits the whole of Europe”, he said.

Giani said the terminal would remain in the port for three years, after which it would be moved elsewhere.

Piombino mayor Francesco Ferrari has said he will appeal against the decision.

Before the war in Ukraine, Italy imported 95 percent of the gas it consumed.

Forty percent of that came from Russia, a figure that has since dropped to 10 percent after Draghi took steps to boost gas from other producers, while also accelerating a shift towards renewable energy.