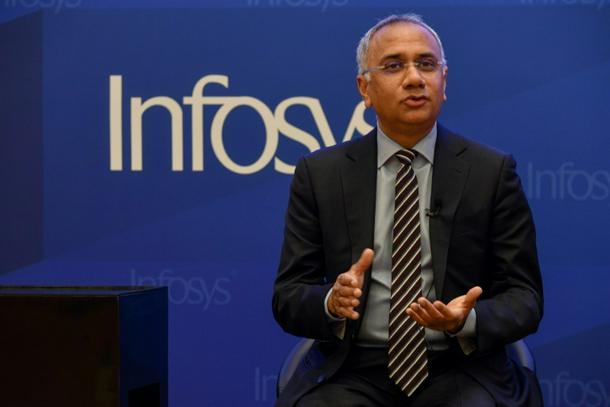 Tech companies have benefited from higher digital services demand since the pandemic, and India’s second-largest IT company has kept a robust balance sheet despite labour competition driving up sector salaries.

Revenues were up 23.4 percent for the same period, helped by strong demand in North America and Europe.

“While concerns around the economic outlook persist, our demand pipeline is strong as clients remain confident in our ability to deliver the value they seek,” chief executive Salil Parekh said in a statement.

The Bangalore-headquartered company reported large deals of $2.7 billion for the quarter, its best result in nearly two years and up $1 billion from the June quarter.

Its board approved plans to buy back shares worth 93 billion rupees ($1.13 billion) at 1,850 rupees per share, a 30 percent premium to Thursday’s closing price.

Chief financial officer Nilanjan Roy said the board had approved an open market share buyback of 93 billion rupees ($1.14 billion) in its meeting before the results announcement.

Infosys also reported a marginally lower employee attrition rate – a key metric for IT companies – compared to the previous quarter.

Competition for employees has increasingly driven up salaries and weighed on operating margins of Indian technology companies.

“While supply side challenges are gradually abating as reflected in the reducing attrition rates, they continue to exert pressure on our cost structure,” Roy said.

Infosys is India’s second-largest information technology company and earns more than 60 percent of its revenues from North American markets.

It was at the forefront of an outsourcing boom that saw India become a back office to the world as Western firms subcontracted work to a skilled English-speaking workforce.

Shares in Infosys closed 0.64 percent lower in Mumbai ahead of the earnings announcement.